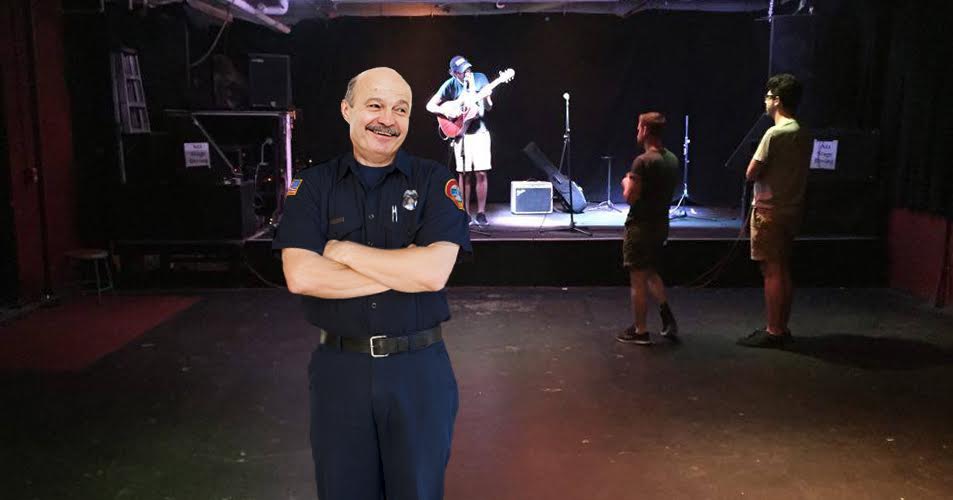 ALLSTON, Mass. – Fire marshal and building safety inspector Michael Sharpe was reportedly “wholeheartedly charmed” by the safety margin noted during last night’s show at the Gorilla Lounge, which had a total attendance of six people.

“Look at this place,” Sharpe exclaimed. “There is a clear path from one exit to another without a single person in the way, there are no huge amps plugged in to questionable outlets, and it’s even above ground. What a treat.”

Not all present shared Sharpe’s enthusiasm over the non-attendance, however. Local promoter Darren Digby claimed the show was “sure to become more dangerous” once the headlining band started playing.

“I know this place will fill up soon,” Digby predicted. “I have a bunch of friends getting out of work late who promised they were stopping by and they also said they’d totally put out the word. It’s just typical ‘punk time.’ This place is going to get rowdy tonight.”

Sharpe was admittedly nervous to get his hopes up as the inspection began only one hour after the show’s posted start time, but by the third hour, Sharpe could barely contain his excitement for how hopelessly safe the show continued to be, as it became obvious Digby was flat out lying to the bands about any friends arriving.

In his final report, Sharpe underlined in his comments “flat-out tranquil.” And upon finishing his inspection in which the Gorilla Lounge earned a perfect score, Sharpe noted a trend in safer shows as Boston’s punk scene dies a slow and painfully safe-show-ridden death.

“Venues like this used to have kids hanging from the rafters, packed shoulder to shoulder in dimly lit spaces, and listening to bands with huge, high-wattage amplifiers. It was terrible. I think we’re all lucky the scene isn’t what it once was,” said Sharpe, climbing back into his pickup truck. “I heard there is a poetry slam at an anarchist book shop across the bridge; hopefully that is just as empty. I want to go home early tonight.”