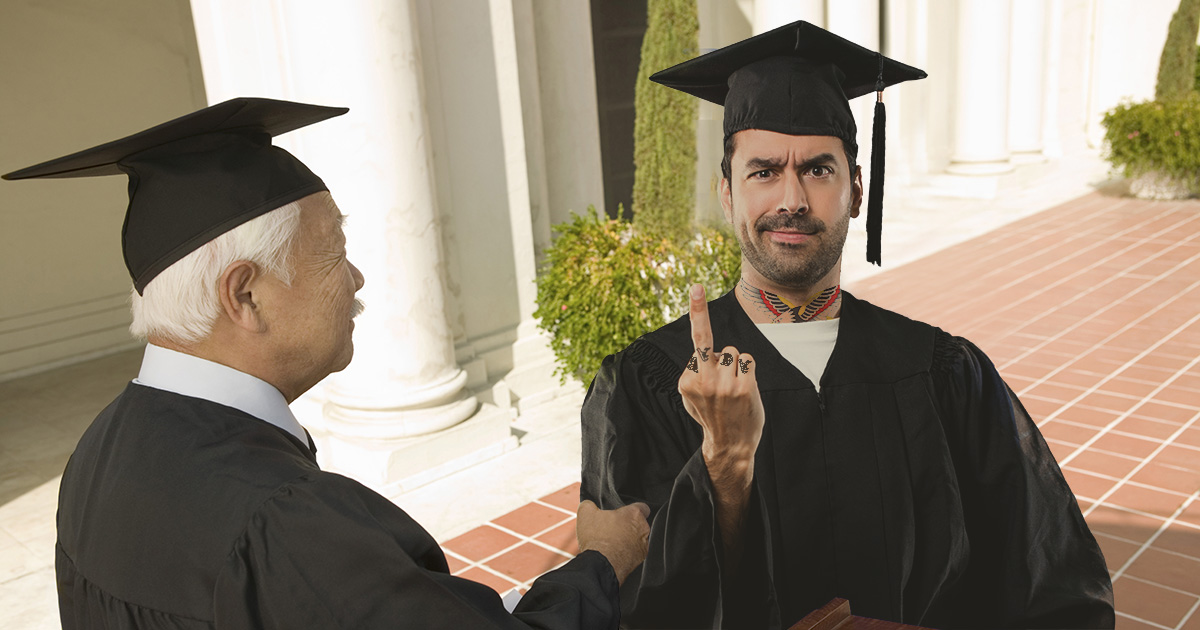 “We like to honor our distinguished alumni, and we felt, given Francis’ success in the music industry, it was only appropriate,” superintendent Douglas Crawford said during the ceremony. “Imagine our surprise when we found he left school halfway through his junior year.”

Upon return to the school, from which he was suspended more than a dozen times and nearly expelled twice, Murray found his old yearbook photo — framed and hung on a spot outside the faculty break room where Murray had spray-painted an “anarchy” symbol in 1998.

“The only notable things I ever did in that school was lighting a trashcan on fire, and dosing Mr. Kahn’s coffee with acid. He had a hell of a nervous breakdown,” said Murray. “Frankly, I’m surprised they even let me back in here, let alone to talk to the students. All I’m gonna tell them is that I’m rich as fuck and have tons of sex… and it’s all because I left this hell hole.”

Shotglass rose to prominence in the 2000s after their song “Wadded Beef” was featured in an episode of The O.C., leading to a headline spot on the Warped Tour and sold-out stadiums around the world — success somehow achieved without Murray’s high school diploma.

“It’s just crazy to think I piss in the same stalls where Frankie smoked cigarettes,” said student and Shotglass fan Terry Espinoza. “I heard he pulled a knife on a teacher once — that is so f’ing cool, man. I wonder what he’d do now that we have metal detectors. Probably something even sicker.”

Fortunately, thanks to his honorary GED, Murray can finally pursue higher education and an honorary Associate or Bachelor degree.

“Maybe now, Francis will take his education seriously and get a real job,” Kathy Murray, Frankie’s mother, said during the ceremony. “He could even become an honorary lawyer one day.”

Murray currently plans to frame the GED and then do cocaine off of it.