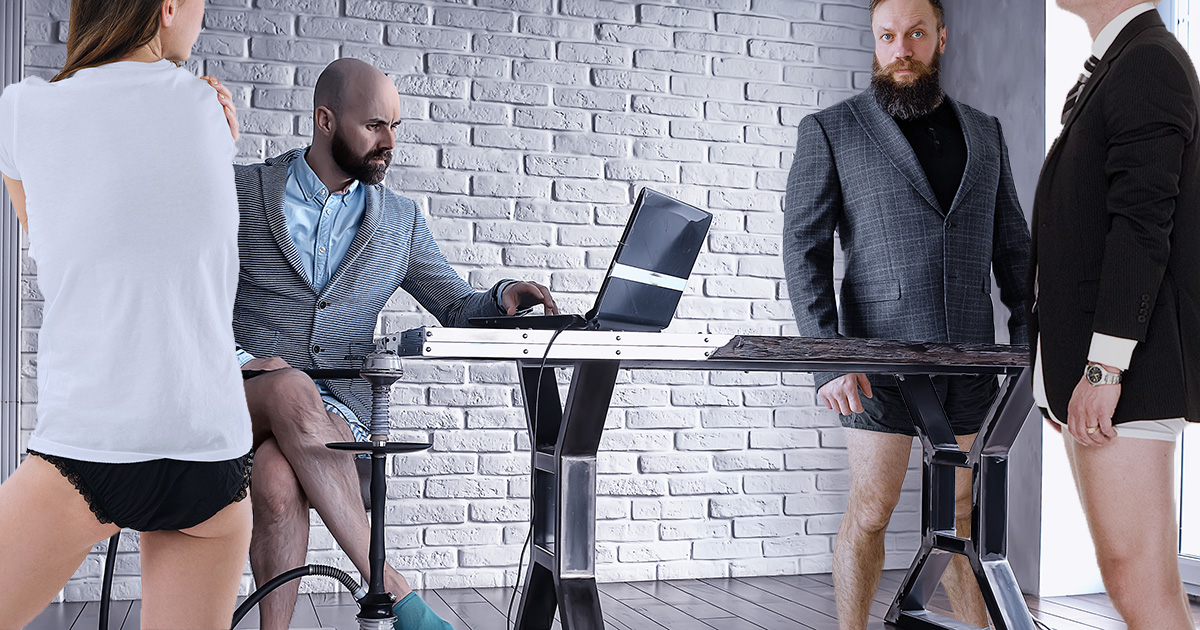 ROCHESTER, N.Y. — After several months of working remotely, employees of Hard Radar Publishing returned to their office for the first time this week, only to realize that every single staff member failed to completely dress, thoroughly embarrassed sources confirmed.

“I was really excited when I first heard we’d be heading back to the office. Working from home was challenging, and I was looking forward to catching up with my co-workers… but it’s pretty hard to catch up with people when no one can make eye contact,” said office manager Wayne Platt, attempting to cover his pantslessness with a stack of unread manuscripts. “Normally, I’d be worried that this would lead to a ton of workplace misconduct complaints. But considering that the head of H.R. showed up today only wearing a pair of stained boxer-briefs, I think we’re all just gonna try to forget this ever happened.”

However, not all were put off, as mailroom clerk David Bonafare appeared mostly unphased by the staff’s collective bout of undress.

“Aw, man… I totally spaced on that whole ‘wear pants’ thing this morning. I guess this explains why everyone was avoiding me on the bus earlier,” said Bonafare during his 9:15 a.m. bourbon break, a habit he picked up in quarantine. “I guess I don’t feel that bad about it since everyone else forgot, too. And I gotta say, it’s kind of freeing to not wear business casual for once. I just wish some people here didn’t ‘go commando.’ That’s a bit troubling.”

“It’s often common for individuals practicing proper social distancing to forgo normal societal mores, such as wearing clothing when speaking with Debra from accounting,” said Mader. “So it’s to be expected that when the public finally re-adjusts to society, certain decorum will inherently be forgotten. Historically, during the Spanish flu pandemic of 1918, many gentlemen returning to work at haberdasheries would often forget to properly press their bowler hats; this time around, it appears that people have just neglected to conceal their genitals. These things just happen in cycles.”

Hard Radar Publishing has since revised it’s dress code policy to include banana hammocks and Spongebob Squarepants boxer shorts on the list of unacceptable workplace attire.