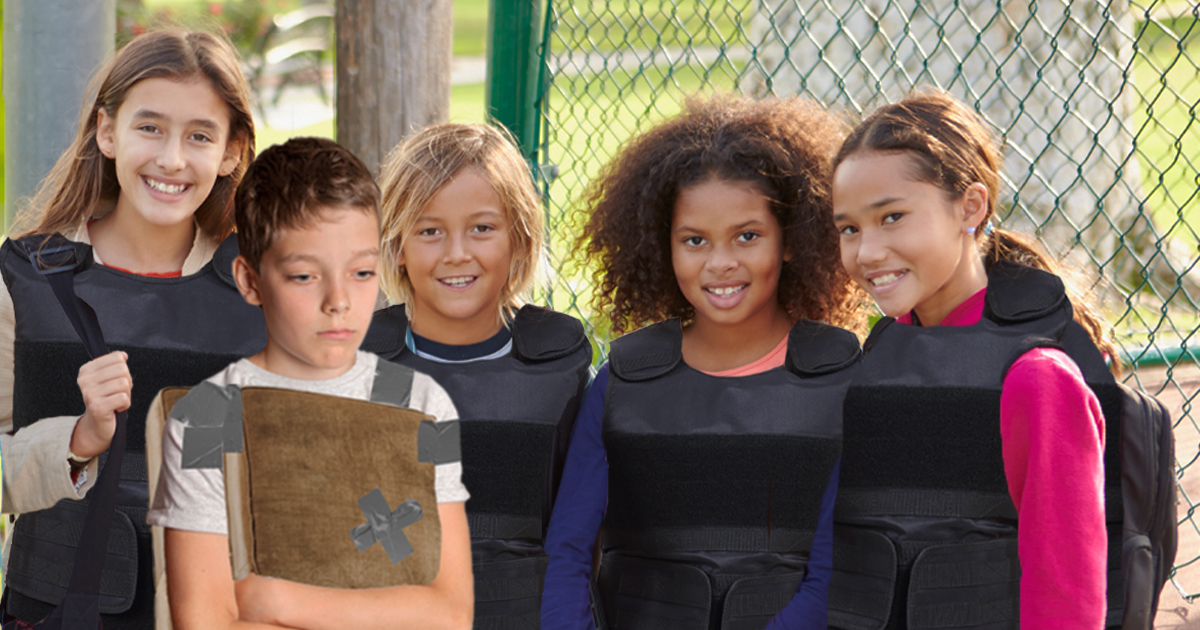 AKRON, Ohio — Local fourth-grader Vincent “Vinny” Ortiz-Galt felt “I don’t know, just bad, I guess” about wearing a homemade bulletproof vest to school that was crafted by his mother, a red-faced source said.

“Mom tried really hard,” said Ortiz-Galt. “But I don’t get why I’m stuck with this thing, with the stupid fabric from our old couch… and jerks like Bobby Belson get to have cool bulletproof vests from this year’s line. At recess yesterday, they were hitting him in the chest with tennis balls and he kept saying he didn’t feel it but I bet he’s lying. Meanwhile, my mom filled my vest with spare change and bottle caps, and now my back hurts.”

Ortiz-Galt’s mother Clara said she understood her son’s discomfort, but emphasized she can’t afford “those nicer vests, with all the gadgets and doo-dads, like the popular kids wear.”

“I have to teach him that looking cool isn’t important,” said Mrs. Ortiz-Galt. “What’s important is studying, behaving, and trying his very hardest not to get mowed down by the mass-shooter-du-jour. I’m already working on another vest — this time, in some vintage cowboy fabric I found. Who knows, maybe I’ll open an Etsy shop!”

Ortiz-Galt’s teacher, Mr. Brian Rice, conceded that social conflicts between kids of different backgrounds have always existed, “but at least it didn’t used to mean the difference between living and dying if some random guy with a gun has a bad day.”

“Back then, if you were the weird kid, you’d eventually get into Dungeons and Dragons or punk music and get picked on for that instead,” explained Mr. Rice. “At least no children were wearing fucking ‘Punisher’ logo body armor on their way to learn the ABCs. And don’t even get me started on the ones who get cell phones before they could read a goddamned chapter book! A sign of the times, for sure.”

At press time, Ortiz-Galt was making friends with a classmate whose bulletproof vest was obviously a hand-me-down.