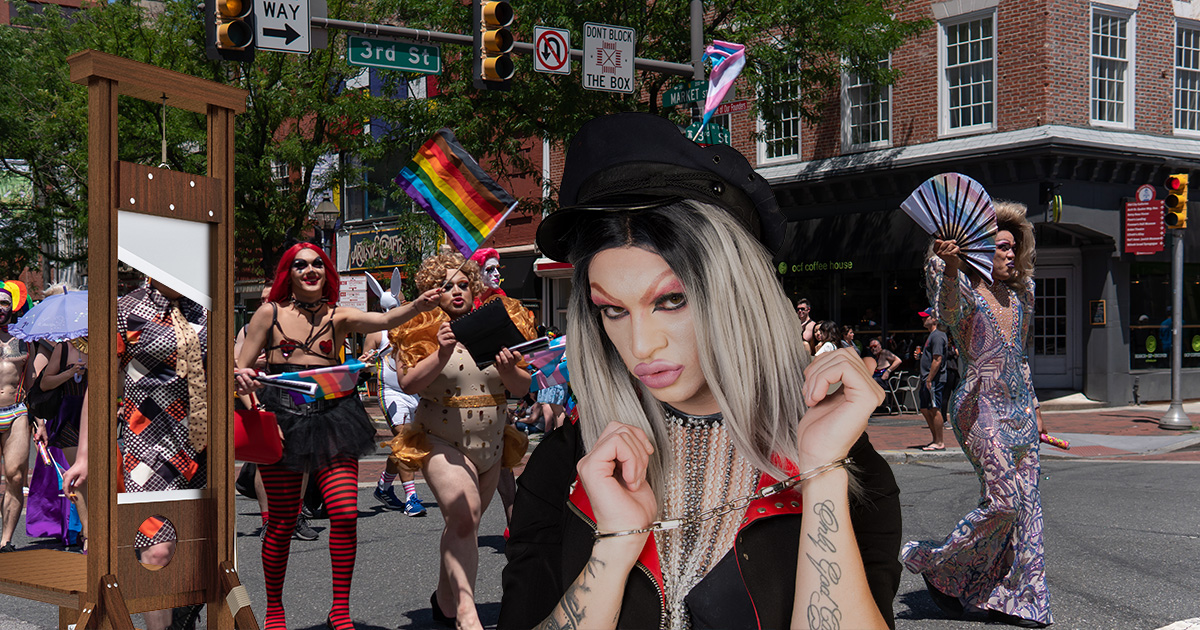 DRAG KINGDOM — The tyrannical Drag Queen known as Cleo Fabtra was overthrown in an absolutely fabulous revolution by drag peasants yesterday who were fed up after years of oppression, confirmed straight-laced intelligence sources who have no idea what the hell is going on.

“With all the work we do, we should be a pussy on fire if it wasn’t for Cleo Fabtra keeping us in serfdom,” said Muffuletta, one of the peasants who stormed the royal runway. “We can’t even feed our families because she throws so much shade the crops won’t grow, and her pomeranian has bitten so many of us that we have no other options. All the while, she lives in opulence kiiking with those hateful bitches in the house of Del Rio. We saw things weren’t getting better, and decided now’s the time to serve some revolutionary realness. By the time we’re done with her, she’ll be nothing more than a Bar Queen in Bakersfield, if she’s lucky.”

Cleo Fabtra was immediately placed in a holding cell, awaiting trial for her crimes.

“To all those boogers who can’t handle the fact that I’m their Queen: Ha! Suffer,” said Cleo Fabtra from her cell, ornately decorated and with a well lit vanity mirror. “Those crusty, loose-tucked, 5 o’clock shadowed, Party City, decomposing-corpse-of-Joan Rivers wannabees couldn’t vogue their way out of a paper bag. I’d read each and every one of them, but I don’t wanna call attention to your illiteracy. They all better get out of my sight. I hear the Boulet Brothers are collecting uglies for season four.”

The U.S. Government is already planning to intervene, as the Drag Kingdom seeks out new leadership.

“The Drag Kingdom is the world’s biggest exporter of glam,” said C.I.A. director William Burns while standing in front of a bedazzled map of the Drag Kingdom. “If the revolution shakes things up too much, this could affect our economy. As long as we know they will play by the rules, we will give the newly elected leader a proper condragulations. Otherwise, we will be forced to activate Operation Bye Felicia.”

Indeed, after a long herstory of kings, queens, and oligarchical runway judges, the citizens of the Drag Kingdom are optimistic they will be able to form a new drag democracy.