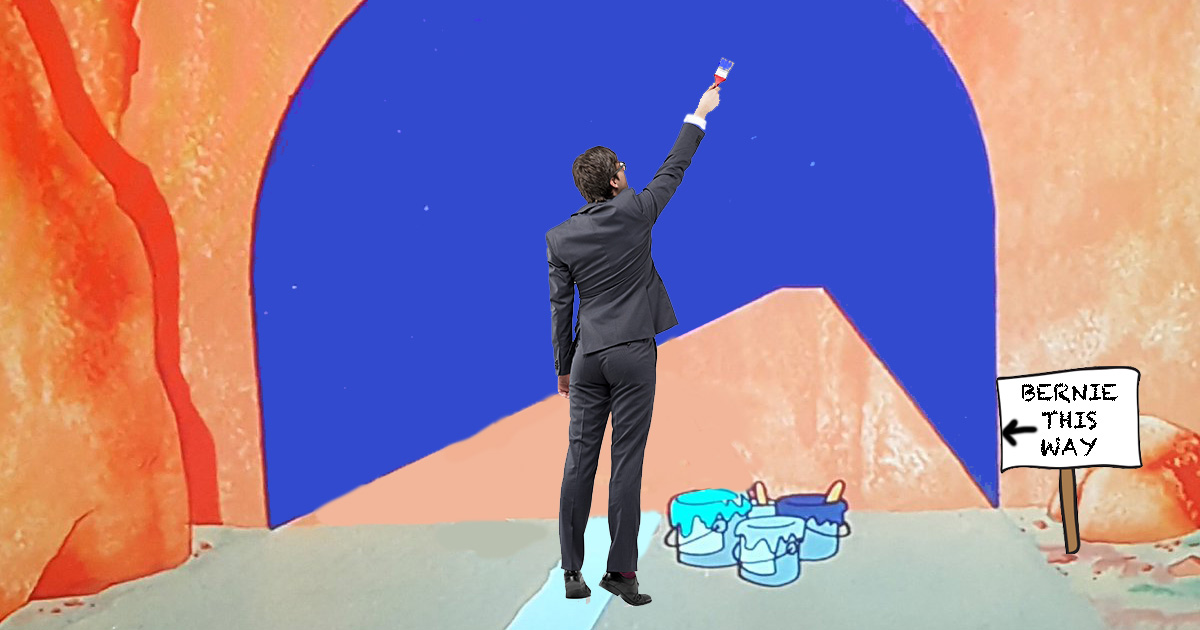 “We’ve tried everything to get rid of this guy, and I’m at my wits’ end,” said Perez. “In Iowa, I had this box full of TNT marked ‘Medicare-4-All Inside’ and sure enough, Bernie started sniffing around the thing. But when I pressed down on the detonator, it backfired and sent me flying 400 feet — blasted my head straight through a rock. But this painting is sure to work. He’s going to be driving along, then, BLAMMO! Goodbye Bernie, hello moderate Democratic candidate.”

DNC staffers have allegedly set up a variety of booby traps to stop Sanders, but all have failed.

“I was told to install a door next to a cliff, and then guide Senator Sanders through the door so he would fall to his bloody death,” admitted DNC intern Angela Cower. “But he opened the door, and without hesitation, just walked straight across to the other side of the canyon. He was literally walking on air like it was nothing! I tried to follow him, and made it halfway across… and then saw Bernie holding a sign that read, ‘Look Down.’”

“That’s when I started falling — I broke both of my legs and almost drowned,” she added from her hospital bed. “And before I lost consciousness, I clearly heard Bernie yelling about universal health care.”

“We basically have a backorder on anvils right now because we sold the DNC so many, but every time they try to drop one on Bernie, he’s carrying an umbrella,” said Hudson. “They’ve purchased giant rubber bands, a variety of cannons… even a ‘sexy’ Bernie costume to try to seduce him, but nothing works. Really, they should just stick with their classic move and channel millions of dollars in dark money into the campaigns of candidates more in line with the DNC’s corporate interests. It worked in 2016.”

Witnesses report the Sanders campaign bus passed easily through the painted tunnel. Immediately after, a dismayed Perez tried to do the same and flattened his face, landing himself in a nearby ICU with massive head and spine injuries.