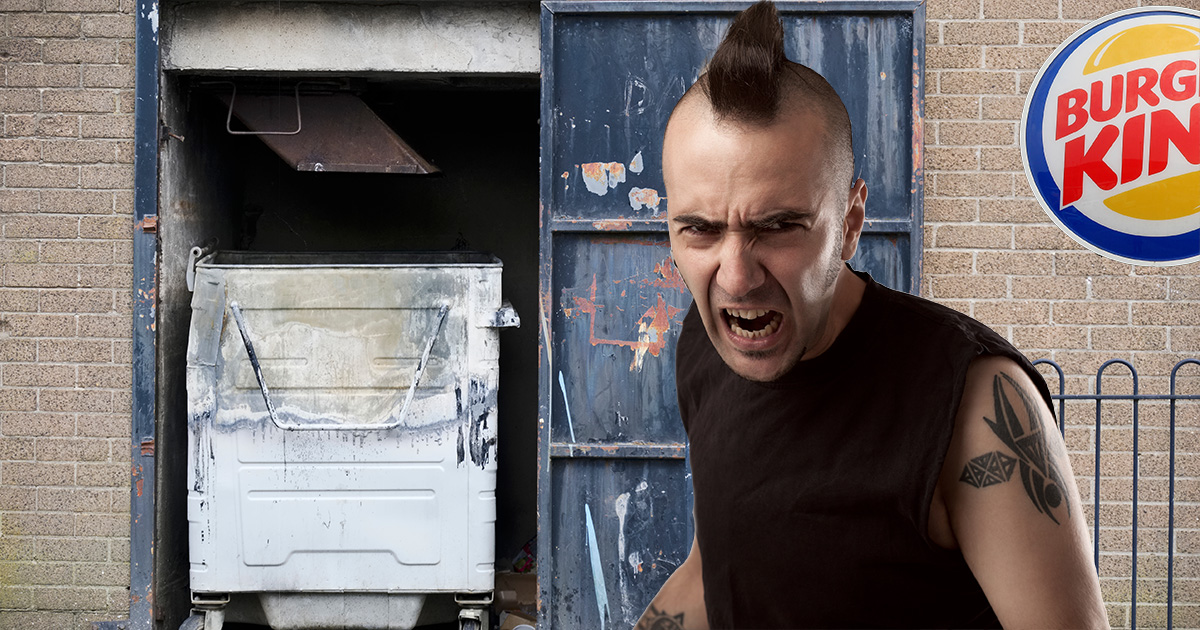 SACRAMENTO, Calif. — A freegan crust punk was left horrified and repulsed after discovering where the food in the dumpster behind his local Burger King is procured, sources within the local scene have reported.

“For the past few weeks I really thought I had finally found a quality diving spot. It’s close to the interstate, gets replenished nightly, and it usually has those cinnamon sticks that I like. I just thought the Burger King in front of it was like some kind of front to keep people away. But yesterday I actually saw an employee come out of the back door and throw actual Burger King food into the dumpster. Talk about a wakeup call,” said Liam Olivieri while trying not to dry heave. “It really makes you take a step back and consider what we’re actually putting into our bodies. Had I known what was actually in that dumpster, I’d have just gone rooting through the garbage at the Shell station down the road.”

Employees of the Burger King were at a loss as to why Olivieri was so shocked that the dumpster contained their food.

“It’s pretty rich that some dude with infected tattoos is throwing a shitfit because the food he’s digging out of our trash matches the sign out front. The only reason he’s complaining is because he came in to use the bathroom and saw us painting the grill lines on the burgers,” said restaurant manager Ruth White. “What’s the point of dining out of trash bins when literal beggars are being choosers. But for what it’s worth, I wouldn’t eat this stuff either. Our cardboard crowns have more nutritional value than our fries.”

Freegans around the country are calling on Burger King and other bottom tier fast food restaurants to move towards more ethically sourced leftover scraps.

“Our lifestyle is all about cutting down our carbon footprint while simultaneously not giving a single dime to line some corporate asshole’s pockets. But how can we feel good about finishing someone else’s half eaten sandwich knowing it’s from an establishment best known for selling horse meat coated in 2,000 grams of sodium,” said dumpster diving activist Chip Ricardo. “People have a right to get their sustenance from a trash can without developing a cardiovascular disease while doing it.”

Due to public pressure, Burger King announced that it will begin listing the nutritional value and ingredients of all of their dumpsters by the end of 2022.