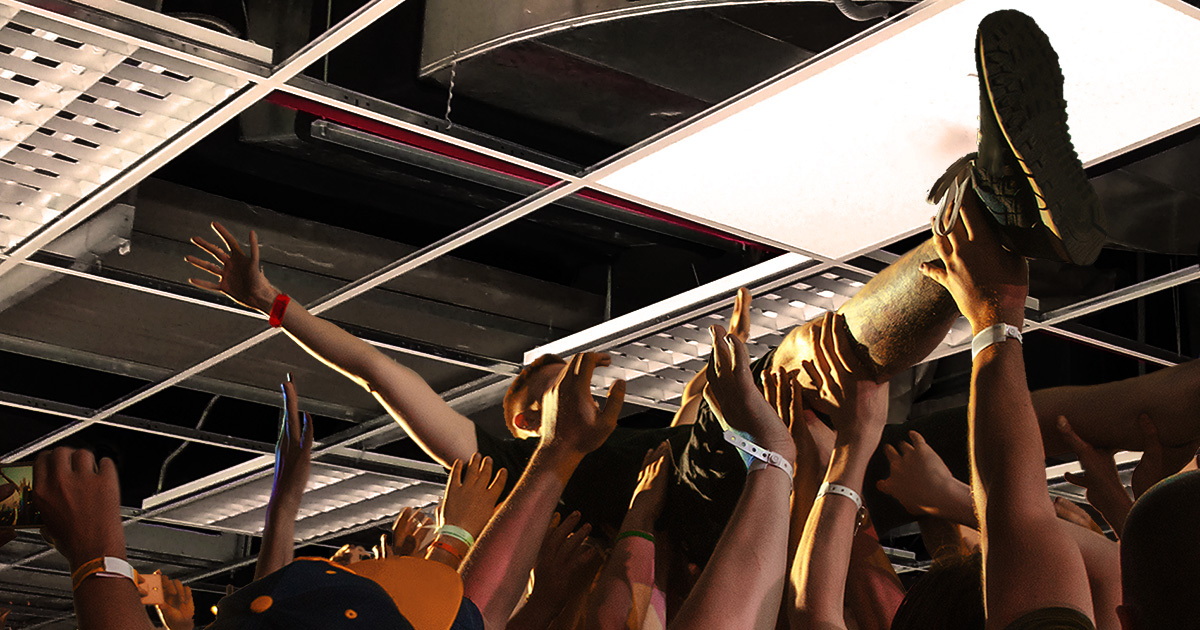 “That motherfucking piece of asbestos riddled shit is mine,” grumbled Trimble, as he slowly guided himself atop the heads and hands of the crowd. “I can’t explain why, but its very existence offends me. I just keep hearing its taunts… ‘Couldn’t kill us all last time, could ya?’ Like my dad asking about that other 2% when I brought home a 98% on my biology test. Your shattered remains won’t look so smug from the fucking floor!”

The crowd of literal and figurative supporters cites this common goal as a great way to galvanize the scene.

“This is what they mean when bands scream about family! Working together to destroy property in every venue that allows us to throw hardcore shows is what unites us as a scene. I remember when we all banded together to rip a wall down at the Teen Center and got shows shut down there forever, that was a magical day. We should all be ashamed of ourselves if that ceiling tile is still there when A Day and a Deathwish finishes their set,” exclaimed emotional scene elder Corey Bernard. “I’m glad this kid is like a hundred pounds soaking wet because landscaping by day and aiming kids at tiles for the entire stage-to-tile stroll by night has really taken its toll on my back.”

“Aw not again! I need that to show my ceiling tile guy so we can make sure we get the right replacements,” said D’Agostino as he tried to push his way into the crowd. “It seems like they are deliberately trying to keep me away. I tried turning the lights on and off to signal the band needed to stop playing, but that only agitated everyone more. They already broke half our damn tables, I don’t know why the ceiling has to suffer the same fate.”

At press time, the crowd cheered as Trimble’s fist penetrated the tile while D’Agostino contemplated if a drywall ceiling would deter the destruction or become their next group project.