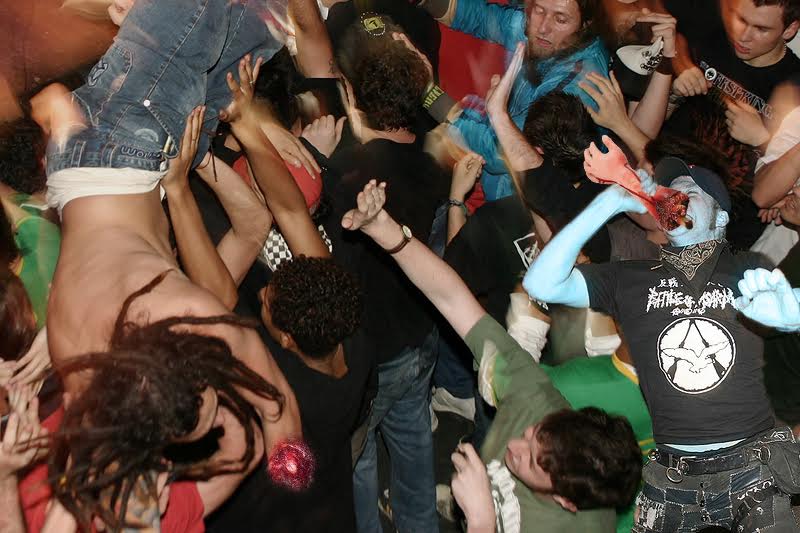 VENICE BEACH, Calif. – Sean Clark is no stranger to stagediving. The experienced crowdsurfer has safely navigated through schools of angry skinheads, tangles of steel barricades, and hurricane-level norm storms.

On June 6, 2013, when Clark pushed by other concert goers and hopped on stage, nothing seemed out the ordinary. Visibility was good; the audience appeared calm. Clark moshed across the stage like he had so many times before, pausing briefly to sing the chorus before he eyed the spot of his dive. Little did he know that he would soon be in for the fight of his life.

Soon after landing on top of the crowd, Clark was attacked by a 6-foot hammered crust punk that had been circling unknown to him and the audience, just 15 feet from the stage.

“Generally the hammered crust punk is a docile creature — it’s a bottom feeder that spends most of its time scavenging,” Dr. Ivan Havoc, one of the foremost experts on crust punks, said. “These attacks are rare, the last time we’ve seen an incident of this magnitude was at a Dystopia show in 1992.”

Statistically, juveniles are responsible for the majority of attacks, with most hammered crust punks reaching maturity by the age of 27, when they generally move on to different musical scenes and, in some cases, even shed their buttflaps.

Clark had been floating on the hands of the audience when he felt the first nip at his leg and, before he knew it, he had been dragged down to the bottom.

“When all I could see were Vans shoes, I knew I was in trouble,” Clark said.

In a panic Clark began to strike the hammered crust punk, but due to the creature’s consumption of malt liquor, and various inhalants, these blows had little effect. Clark was able to eventually land a punch to the creature’s nose, which caused it to release him from its jaws. Clark then mustered what little strength he had left to fight his way to the top of the crowd.

The attack was over in a matter of minutes, but unlike some hardcore music fans who have been attacked and vow to return to shows, Sean Clark is done.

“I’m blessed to have a second chance to spend more time with my record collection,” Clark said about his life since the attack.

Photo by Tatu & The Gliss