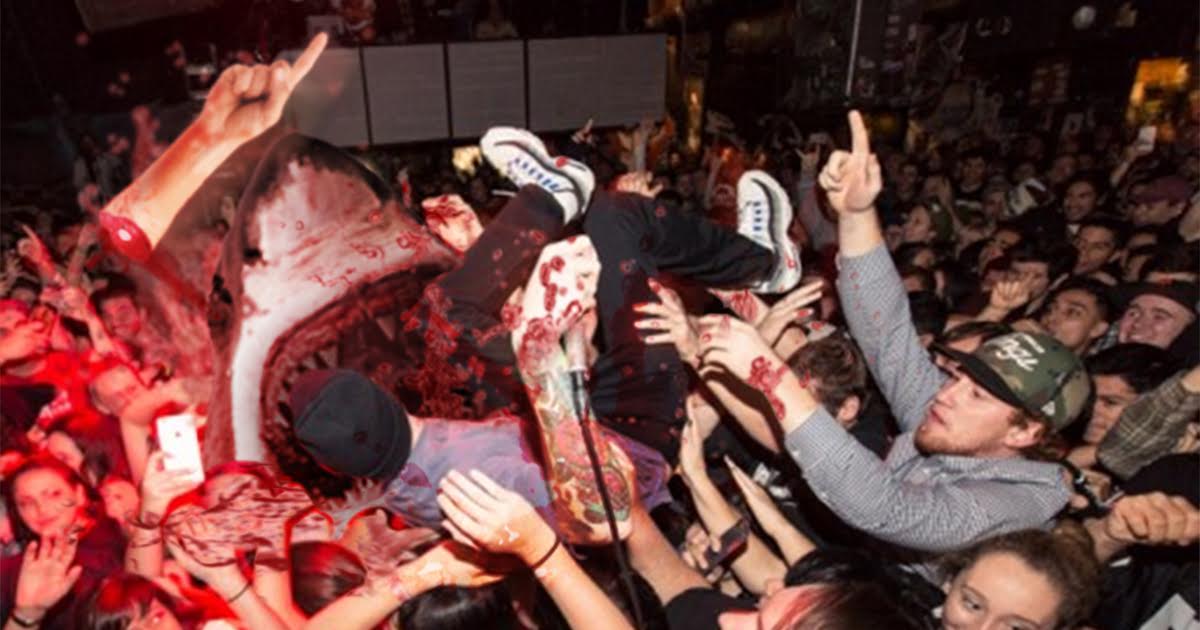 “It was the most horrific thing I‘ve ever seen,” said witness Odeya Cerulli. “One moment, the dude was pointing along to his favorite song; next thing I see, his dismembered arm is flying across the room.”

While many said the shark’s attack was sudden and unexpected, some admit they saw warning signs.

“It’s the most annoying thing when someone blocks your view the whole show,” said 5-foot-8 Jordan Lusk. “This slimy fish dude was in front of me all night, and he wasn’t even that tall… but his dumb dorsal fin kept getting in my way until he started snaking through the crowd. Then, like a total jerk, he tries to eat the guy crowd surfing. Luckily, I was able to get to him and punch him right in the nose. That ended the fight real quick.”

Kersten, who has only recently stabilized, is trying to stay positive.

“When you do what you love, you gotta be able to take risks. I love the Long Island music scene and I love Long Island [crowd] surf culture,” said Kersten. “Sometimes you crowd surf and nobody is there to support you, and sometimes, a large, predatory sea creature attacks without warning. That’s just life.”

A study by Oceana, an international oceanic safety and advisory organization, revealed 179 crowd shark attacks in the U.S. since 2011, but some say there’s more to that figure.

“Despite the obsession of the media, these stories of crowd sharks attacking crowd surfers are few and far between,” says Dr. Caleb Mencel, a wildlife researcher and biology professor at Binghamton University. “This man’s story is a tragedy, for sure, but crowd sharks don’t naturally attack humans. There’s a very good chance he did something to provoke the creature — such as stage-dive onto the shark’s girlfriend, or spill beer on the shark during the show.”

“The shark could have also been confused by a crowd surfer’s boogie board,” Mencel added. “Never a good idea to bring those to shows — starts trouble every time.”

At press time, Rebellion Music Hall, the scene of the attack, issued a statement banning the shark from attending any future shows at the venue.