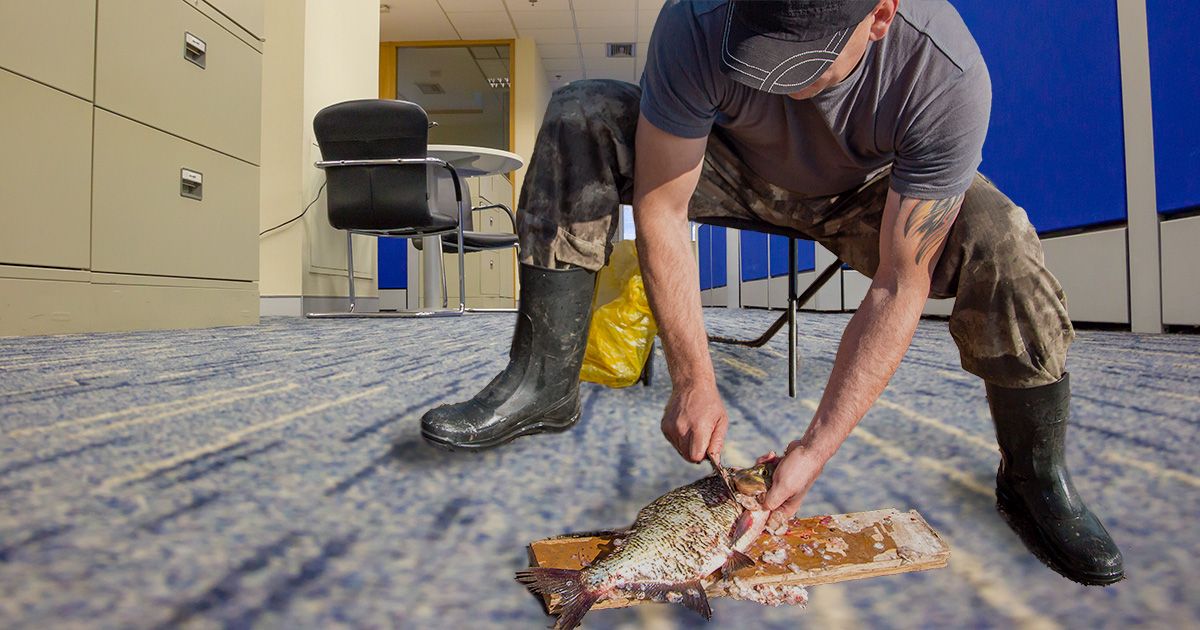 BOWIE, Md. — The staff of Free State Digital are reportedly at their wits end over sales rep John Morris’s habit of microwaving, gutting, and cleaning fish in the office breakroom.

“We all suspected John was the one causing all the weird smells in the kitchen. No one wanted to call him out without proof… but then one afternoon, I walk in and the motherfucker is fileting a bass on the floor like he’s goddamn Bear Grylls or something,” reported irate coworker Alyssa Gomez. “The pile of fish guts in the trash can is really starting to stink, and it’d be nice to open the fridge for once without a bunch of fishheads staring back at me. This is worse than the weekend I caught him slaughtering chickens in the conference room.”

Complaints to H.R. manager Margaret O’Neill have reportedly been in vain.

“I don’t like it anymore than the rest of the staff, but, legally, I can’t tell him not to do this,” an exasperated O’Neil stated. “Morris has the right to eat what he wants for lunch at work, and as long as it’s not putting anyone else’s health or safety at risk, we have to be accommodating. I suggested he do the gutting and scaling before he came to the office, but he told me he’d gone fishing that morning before work and didn’t have time to go home and do that since he was already on final tardiness warning. My hands were sort of tied there.”

For his part, Morris was adamant that he was doing nothing wrong.

“Jesus, what a bunch of fucking babies… it doesn’t even smell that bad. You’ll get used to it eventually,” said an incredulous Morris as he decapitated another fish with a cleaver. “Did I say anything when Jill brought that yappy fucking dog in the office? I’m sorry if saving the heads to make a stock offends some people around here. And as far as the guts are concerned, I’ll throw those out when the can is full. It’s called being green, you fucking idiots.”

Morris then excused himself as he remembered there was a deer in the copy room he needed to field dress.