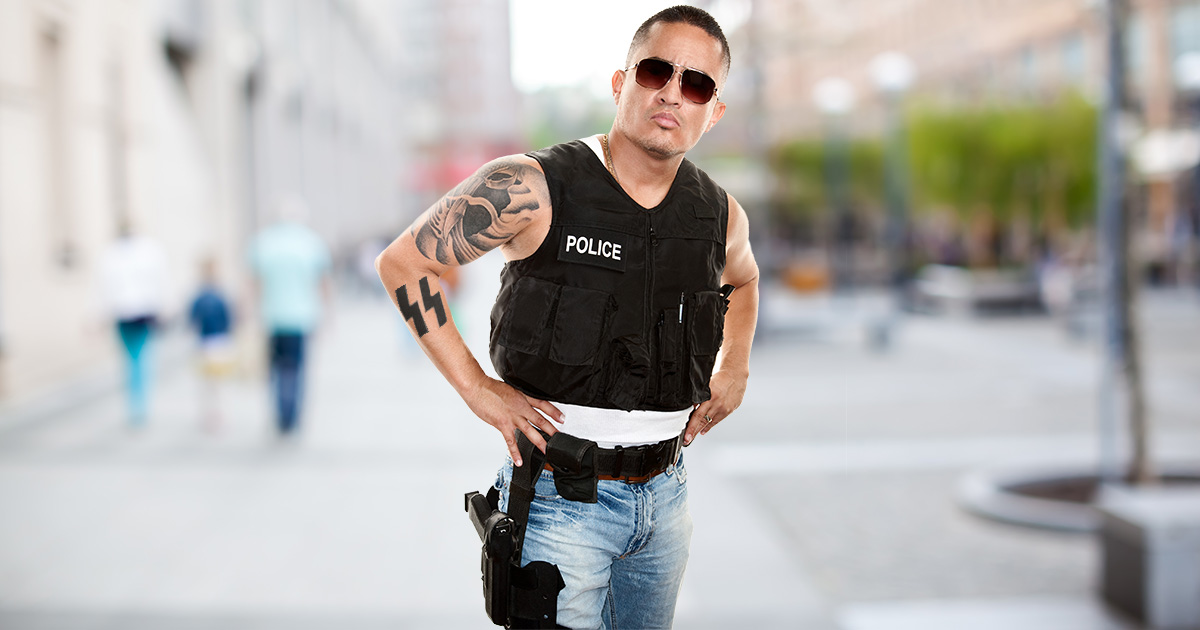 “When you’re an 18-year-old kid fresh out of police academy, you just don’t think of how societal norms may change,” Ofc. Barton sighed. “If I knew back then that one day, Antifa thugs would be getting every cop with visible Nazi tattoos kicked off the force, I would’ve just gotten the damn thing on my thigh where only I could see it. Instead, I’m here trying to convert my bolts into a Punisher skull… and let me tell you, I worry it can’t be done. If I just got a swastika like all my buddies suggested, I could’ve covered that up no problem. Live and learn.”

Despite Ofc. Barton’s struggles to modify his tattoo, cover-up, those close to him claim he’s been hostile towards suggestions.

“When he first walked in here, I thought to myself, ‘Sure, this guy is a douche, but I can’t exactly afford to turn down $300 during a pandemic,’ and it’s easy to cover SS bolts with a ‘Sold our Soul’-era Sabbath logo,” said tattoo artist Christopher “Rocksteady” Lawrence. “But as soon as I brought it up, he screamed, ‘All Sabbaths Matter!’ and that we should have White History Month. And I’ve never heard as many racial slurs as I did when I suggested making the skull itself black.”

Police union President Jeremy Cole called the pressure from the community on Ofc. Barton to cover the old tattoo just another example of the “unfair treatment” police receive.

“It’s just sickening what Barton is going through,” sneered Cole while casually heart-reacting “Pepe the Frog” memes on Facebook. “These thugs protesting in the streets are forcing him to adopt their extreme, minority-embracing ideologies, and censoring his beliefs just because they’re ‘offensive.’ If you’re okay with this unconstitutional treatment, take a good look in the mirror and ask yourself who the real Nazi is.”

Cole also confirmed Ofc. Barton has been placed on paid administrative leave so he can properly select and care for his cover-up tattoo.