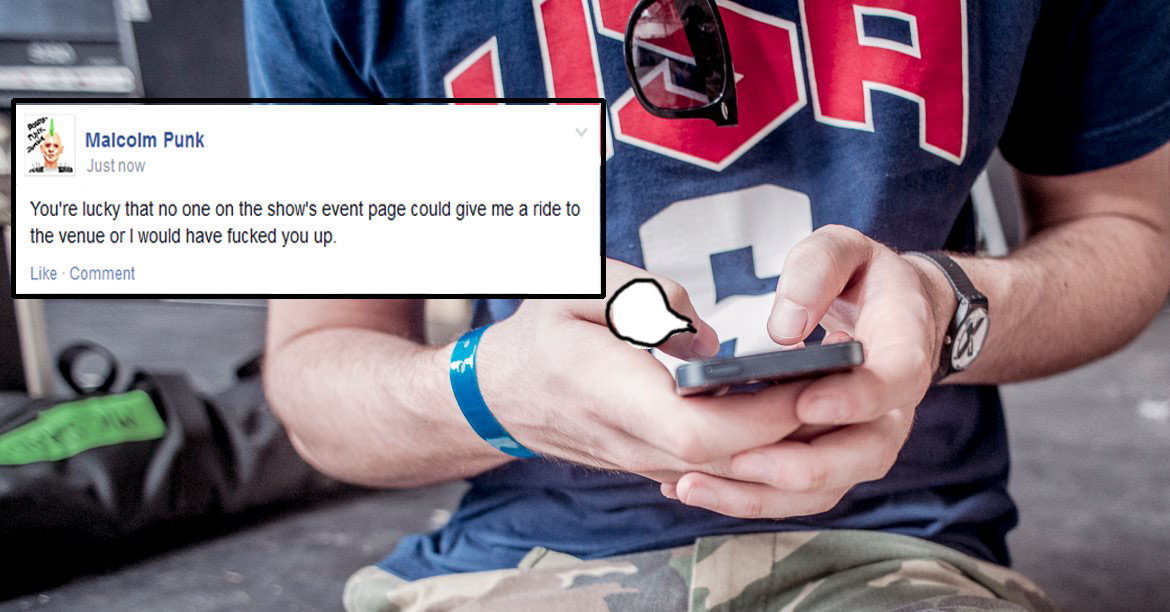 THE INTERNET – Tempers continued to flare across the World Wide Web this weekend due to an incident that occurred during a recent set by hardcore band Wasting Breath. The incident in question left both fans and detractors of Wasting Breath offended, outraged and in the mood for a hypothetical fight that will likely never happen.

“What you did is completely unacceptable in our scene,” one commenter on Wasting Breath’s Facebook page said. “You’re lucky that no one on the show’s event page could give me a ride to the venue or I would have fucked you up.”

Countless anonymous youths took to social media to echo this sentiment, many from considerable distances away. They all explicitly stated that someday, under the right circumstances, the contentious band members are certain to get theirs – even if it’s not necessarily from the commenters themselves, personally.

“Come to Chicago, motherfuckers, I got something for ya,” Tumblr user xunity4lifexcore said – who rounded out his threat with a promise that, if he didn’t have to work on the night of the band’s upcoming show in his area, he would himself deliver some “serious repercussions.”

Looking to confront the issue head on, the band released an official statement via their Facebook page late last night, stating dauntlessly that, “We’re gonna be who we’re gonna be. It is what it is. Haters gonna hate.”

The band plans to let this blow over during the coming weeks, delete some tweets, then go on their upcoming East Coast tour as planned and face zero consequences until their next controversy.

“I won’t fucking stand for it,” a source close to the situation – who asked not to be identified, yet noted that they definitely aren’t afraid of Wasting Breath – explained, “It’s 2015. These sort of regressive actions and the ideas they stem from must be systematically destroyed, starting with Wasting Breath.”

The hardcore scene has made no official statement, but has implied that it has no plans to point out that most of everyone’s favorite bands have said and done way worse.