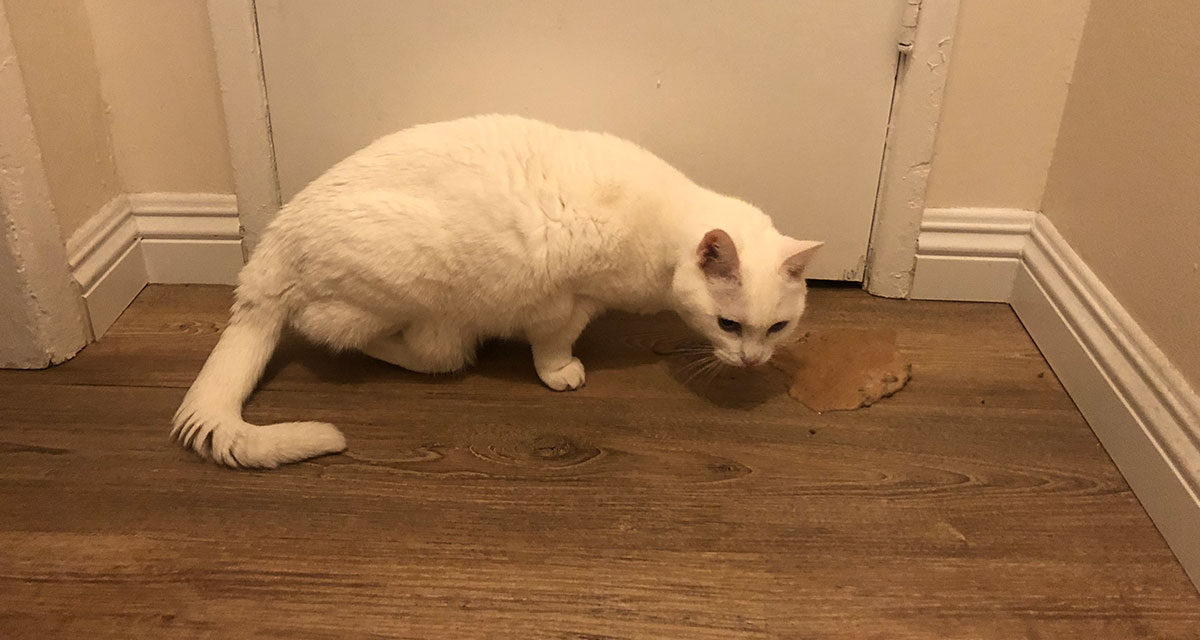 PORT CHARLOTTE, Fla. — Local housecat Poobies was the only resident of 62 South Woodside Drive that contributed to cleaning up a pile of vomit from last Thursday’s party, according to several slightly gagging sources.

“Well, this is great news. That was really starting to stink,” said the cat’s owner Kasem Sharpe. “I was wondering when someone would get around to it — not surprising, as Poobies has the best hygiene of all five roommates in the house. She’s constantly cleaning herself and honestly, she has the best breath out of anyone who lives here. Sure, she can be passive aggressive at times, but she’s no worse than Derek with his post-it notes.”

Even the crust punk party guests who passed out and spent the night were disgusted by the condition of the house.

“The place was disgusting when we got there, and we only left it more disgusting,” said partier Dru “Comaboy” Watson. “I’m not a clean person, but that house is coated with a layer of stickiness. When we were playing beer pong on someone’s air mattress, I knocked over an urn. I was told not to worry about it, that it was just an uncle… and it all immediately absorbed into the carpet. Not to mention the line to pee in the kitchen sink because the toilet was clogged before the party started.”

When asked for comment, Poobies the cat was eager to relive her meal.

“Ah, yes, that was quite the gourmet treat,” said Poobies of her household contribution. “Chicken parmesan chunks marinated with rum. The texture was divine: crisp around the edges but gooey in the center. Much better than those shriveled nuggets they try to pass off as beef.”

“When my people invite others over, it can be overwhelming, but it also means new eyes to marvel at my immaculate butthole. I also appreciate the food crumbs they leave around — they really help attract mice to tortu…,” Poobies said, leaving the conversation mid-word to watch what can only be assumed was a speck of dust floating in a corner.

At press time, residents were reportedly considering getting a dog to help clean up Poobie’s litter box.