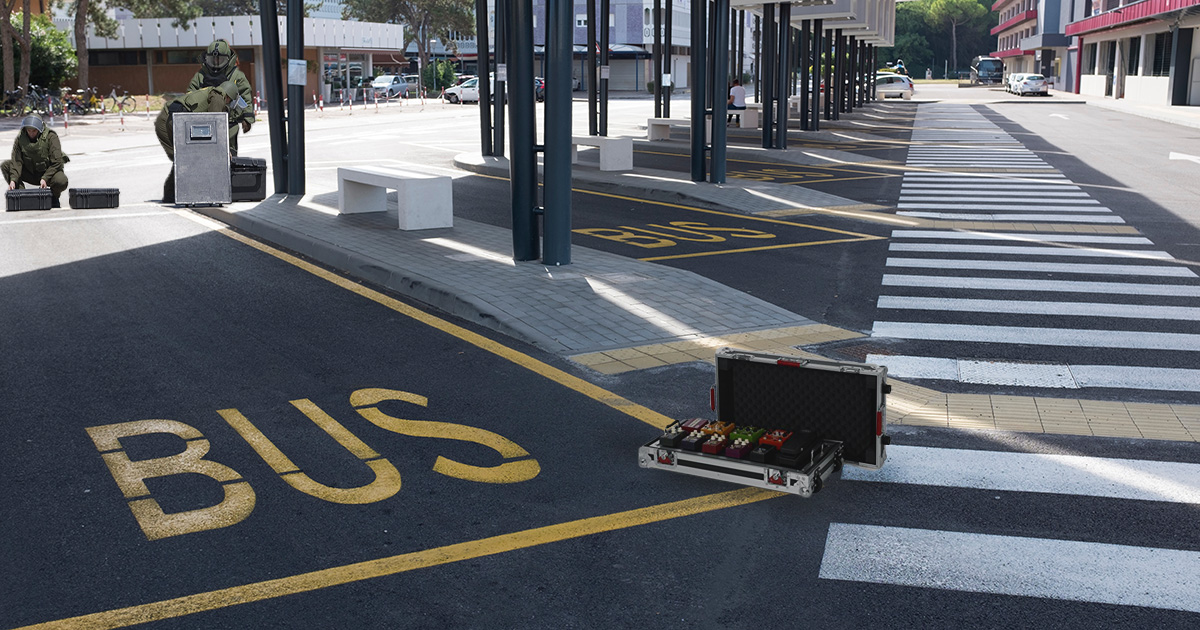 INDIANAPOLIS — Bomb squad technicians responded this morning to a call about a suspicious, unattended device left at a Greyhound bus terminal, which turned out to be a pedalboard forgotten by Garbage Alarm guitarist Earl Stafford.

“I saw this weird contraption with a bunch of wires and buttons and junk just sitting outside the station, so I called it in,” said assistant manager Kenny Wilpon, still shaken from the scare. “I was just gonna ignore it, since my shift was almost over and I really didn’t feel like dealing with it… until I saw what looked like a digital wristwatch wired into some box labelled, ‘Cyborg Butthole Murderer.’ I don’t even know what the hell that means, but it sounded like trouble.”

“I’d say at least two or three times a month, we get called out because some noise rocker forgot a gnarly piece of gear somewhere,” said Sgt. Freed. “I remember a few years back, someone peaked in the Melvins’ tour van while parked outside of a Red Robin and thought the thing was wired to blow the entire block straight to hell. Unfortunately, we have to treat every threat seriously, and follow our ‘render safe’ procedure. Boy, those guys were not happy with us.”

For his part, Stafford was not happy with how responders handled his forgotten pedalboard.

“I don’t see why they had to blow up my pedals, dude. I was only gone for like, 20 minutes, trying to score some beer for the road. I even left on a note on the board that read, ‘Touch this and I’ll fucking kill you,’ and when I got back, there’s cops in bomb suits with a bunch of news helicopters,” said Stafford. “It was actually pretty hardcore when they drove that robot with the shotgun up to it and blasted away. I’m still mad, but if there was any way it was gonna go, it should’ve been like this.”

Stafford later attempted to play “Taps” on his unplugged electric guitar, while the rest of Garbage Alarm buried the pedalboard’s remains.