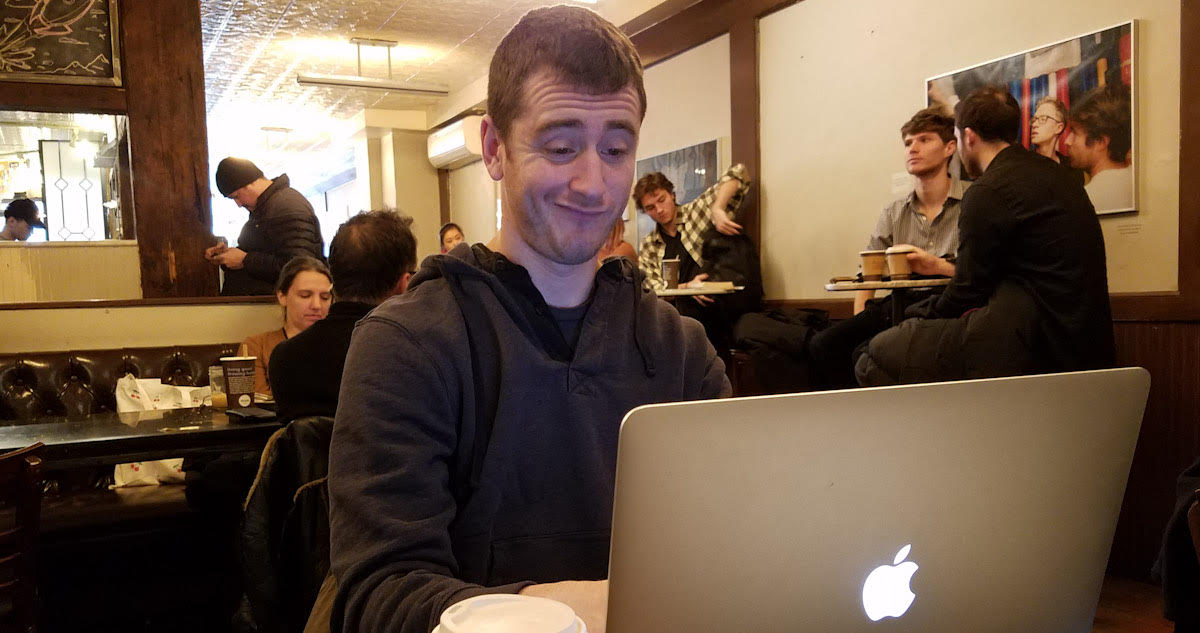 “I have literally never seen a more smug expression in my life — the smirk was so far off his face, I could see his lips… and I was standing directly behind him,” said Graham Mellor, the manager on duty. “I didn’t get a good look at what he was writing, and, frankly, I’m pretty happy I didn’t. I feel bad for all of his friends who have to pretend to enjoy it.”

Researchers found a wide variety of think pieces on Headon’s Medium profile, including The Vas Deferens Dialogues: Happiness Through My Penis, and What It Learned from Me, as well as Five Reasons Dropkick Murphys Doesn’t Get Enough Credit. However, the focus of Headon’s newest piece is anyone’s guess.

“I really couldn’t care less, but judging by his newfound interest in geopolitics, I’d say it has something to do with North Korea… or maybe Syria,” said Michelle Jones, Headon’s reluctant friend and coffee shop companion. “Once he started listening to Pacifica Radio, all of a sudden he’s got all these hot takes.”

Other patrons had differing theories.

“That dude came in with a copy of that screenwriting book, Save the Cat. I bet it has something to do with Hollywood or the film industry,” said Gus Simonon, a freelance graphic designer working nearby. “He’d write something, read it, smile, and then look around the room. He was using an abnormally large font, so I’m pretty sure he wanted people to read his screen.”

Internet historians believe Headon’s actions are the latest in a storied lineage of bloggers desperate for attention.

“It’s tough to stand out in the crowded blog marketplace. Sometimes, you need to generate interest at a macro level by getting the dozens of other bloggers around you at any given time to see what you’re typing,” said Jake Wompach, author of The Bloggers Manifesto: How to Annoy Everyone with Your Unsolicited Opinions. “I’ve employed similar tactics: like saying out loud, ‘Now, THAT is funny!’ Then, getting up and going to the bathroom with my laptop still open. After having six laptops stolen, though, I did change up my strategy a bit.”

Unfortunately, Headon was too engrossed in his work to comment.