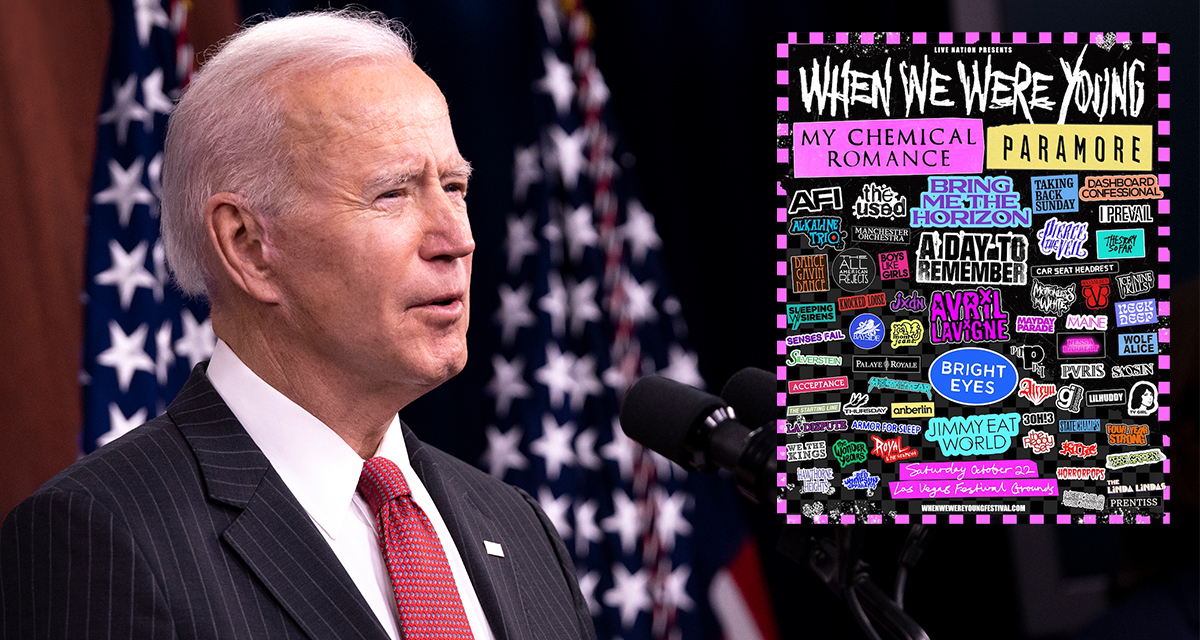 WASHINGTON — President Biden downplayed the failures of his infrastructure and voting rights bills earlier today and instead took full credit for the impressive nostalgic lineup set to be featured at When We Were Young Fest later this year.

“Listen Jack, festivals like this just weren’t happening under the previous administration. I don’t want to point fingers, but the last Warped Tour was in 2016, you don’t need to be a rocket man to do the math there,” said Biden from The East Room of the White House. “I’ve made sure this fest reaches across the aisle and appeals to multiple sub-genres. Whether you’re a fan of classic emo, or you got wrapped up in the glitz and glamour of the MySpace era, this fest has it all. The American people are finally ready to sing along again.”

Opponents of Biden were quick to point out many bands that are not going to be featured at the festival taking place in Las Vegas later this year.

“This festival is not only out of touch with what the people of this country want, but it shows how out of touch the President is. It seems like everyone forgot about the contributions Kansas bands have made to the genre this fest is founded on,” said Senator Roger Marshall (R-KS.) “The first names I should be seeing are The Get Up Kids, The Anniversary, Reggie and the Full Effect, or even The Casket Lottery. But they’re nowhere to be found. I encourage every ‘real emo’ fan to send President Biden a message and boycott this festival.”

“Most people are worried about inflation, schools shutting down again, and making sure they can make it through another brutal winter. I’ve conducted many surveys and not a single person has listed ‘getting to see Silverstein again’ as a top priority,” said Laura Palmer, a professor of Political Science at UMass Amherst. “I will say I was personally disappointed that almost all the bands on When We Were Young are active bands. The President would probably garner a lot more goodwill if he were able to get a band like Orchid to reunite for the fest.”

At press time, President Biden was being fitted in a youth-large Piebald T-shirt, tight pants with a white studded belt, and Saucony shoes, leading many to believe he will be attending the fest in person.