Band Apologizes for Long Silence on Social Media That Nobody Noticed 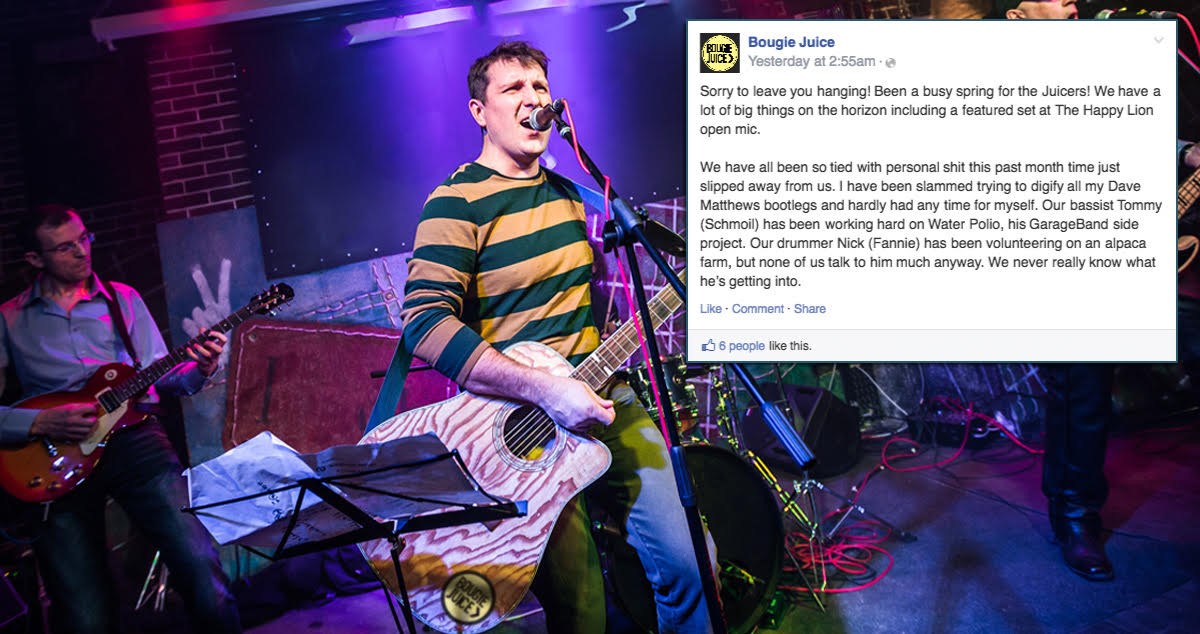 DAVIS, Calif. — Indie-funk-fusion band Bougie Juice broke their social media silence yesterday with an apologetic post after five weeks without a status update on their Facebook page, receiving nearly a half-dozen likes from their 241 followers.

“Sorry to leave you hanging!” began the post penned by lead singer Perry Tunstall, the only member with admin status on the band’s official page. “Been a busy spring for the Juicers! We have a lot of big things on the horizon, including a featured set at The Happy Lion open mic.”

Tunstall explained the band’s hiatus and remained optimistic about the future of Bougie Juice.

“We have all been so tied up with personal shit this past month, time just slipped away from us. I’ve been slammed trying to digify all my Dave Matthews bootlegs and hardly had any time for myself,” said Tunstall, who has allegedly now categorized over 750 Dave Matthews recordings. “[Bassist] Tommy [Schmoil] has been working hard on Water Polio, his GarageBand side project, and our drummer Nick [Fannie] is volunteering on an alpaca farm… but none of us talk to him much anyway. We never really know what he’s getting into.”

“The last Facebook post I remember was of a video where they sang ‘No Scrubs’ at Froggy’s,” Giovani said, referring to the band’s most popular post released two-and-a-half years earlier. “And I only remember that because there was like, some sort of Facebook bug where that was the only video populating my feed like, all day. Even if I tried to mute their posts, it still popped up.”

In total, the post breaking the silence was viewed by just over 9% of Bougie Juice’s audience, according to Facebook analytics. Of that 9%, five of the band’s fans engaged with the post — three of which are assumed to be bots selling movie tickets.