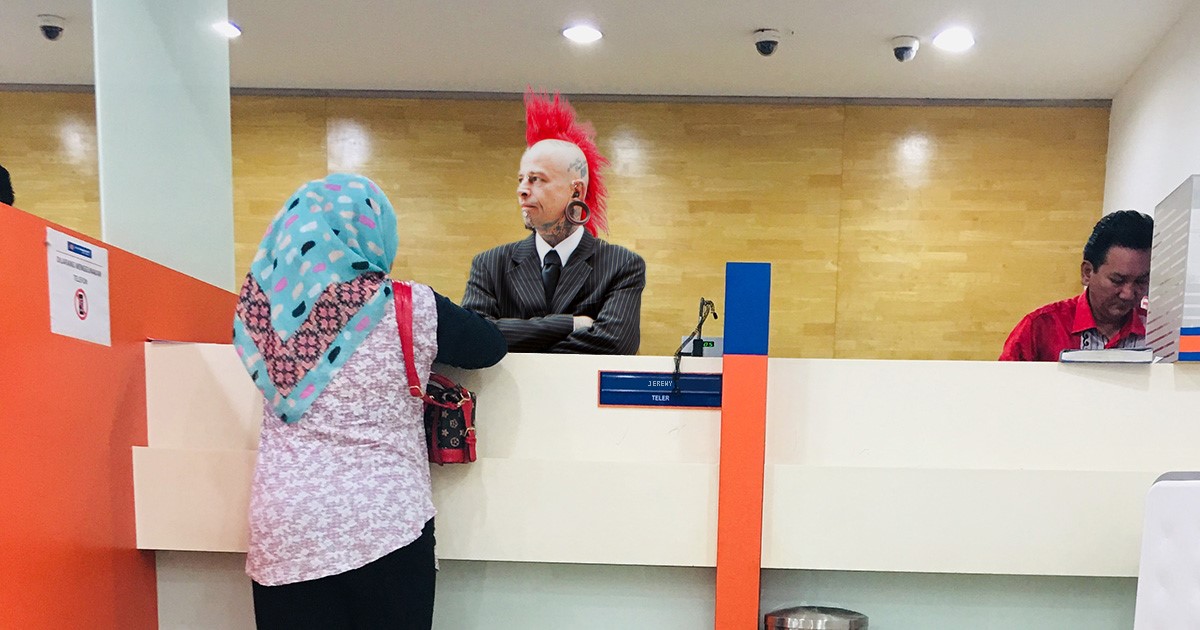 CINCINNATI — Self-described anarcho-punk and Wells Fargo bank teller Gary Morin claimed again today that he only took his job 12 years ago to bring down the banking industry from the inside, incredulous punk sources confirmed.

“Back in like, 2008, Gary got busted for spray painting some cop cars and needed money fast. He took the first job he could to pay the fines, and his dad managed Wells Fargo branch, so he started there that week,” said punk Rochelle Nunez. “[Gary] says he stuck with it even after his debts were paid off so he could ‘expose the evil, inner workings of the bank’ — but it doesn’t seem like he’s making any progress. He claimed last week he’ll be ready to ‘unmask the fatcats’ when his 401k fully matures. I don’t even know what that means.”

Former roommate Aidan Goldsmith detailed Morin’s gradual change from, “The proletariat have nothing to lose but their chains,” to, “Guess who got an Amazon gift card for meeting his sales goals?”

“It happened so fast — he’d say, ‘Check out this tie, it’s argyle. Isn’t it great… like, ironically?’ And, ‘Oh, man… imagine if I moved into that new condo building they just built, but as a joke?’ Soon enough, he was gone,” said Goldsmith. “Sure, Gary’s tried to keep in touch, but it isn’t quite the same. Once, he came to a house show after work, but he was still in a suit. Everyone thought he was a cop and booked it out the back door.”

Despite his friends’ claims that he’s “in too deep,” Morin insisted he’s still “punk as fuck.”

“Just because I cover my tattoos, drive a Tesla, and have a 12 handicap doesn’t mean I’m not punk,” said Morin. “None of my friends understand the dedication I have to destroying these institutions — like, the other day, I took a 35-minute break instead of 30 minutes. And on Saturday, while golfing with the President of the Rotary Club, I got him a Coke instead of Pepsi from the snack bar. I mean, it was because they didn’t have Pepsi and I apologized to him, but I bet it he was still peeved, you know?”

At press time, Morin was assuring his friends that he fully intends to bring the corrupt and immoral banking system to its knees as soon as he pays off his 30-year mortgage.