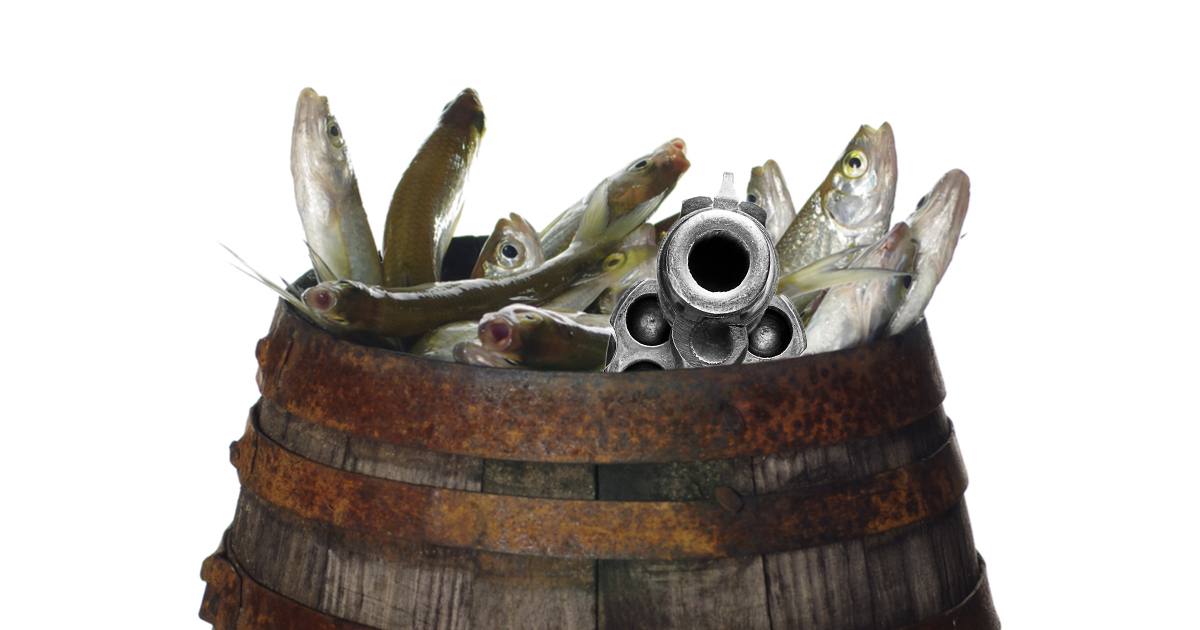 In the event that there are any marine biologists, firearm experts, or, I dunno, active coast guard members reading this, we need help NOW. Earlier today The Hard Times staff were in the midst of “firearm Friday,” which happened to coincide with “high on paint fumes” February, and things got a little out of hand.

Topics of conversation ranged from assassinating various heads of state and wondering if shooting fish in a barrel was as easy as they say. That’s when one of our more proactive writers got the idea of stealing a bunch of fish and putting it to the test. The barrel one. Not the assassination one.

So we grease up a couple of salmon and take them back to the Hard Times lab. We’re kidding, we don’t have a lab! It was actually our poser cold storage unit. A few minutes of fish taunting and gun twirling later, we dropped our gun in the barrel. Looks like it’s the fish’s gun now and there’s no telling what those scaly bastards will do with it.

We’re not idiots. We’re 70% certain that fish do not have the necessary digits to operate a firearm. However, the fish hold all the cards right now and I’m not taking any chances. What are they gonna do? Band together and form as one with the barrel, creating some kind of gun-toting barrel-fish hybrid?!

Okay shit, let’s plan for the worst. Assuming they took all of our aforementioned taunts to heart, we’re thinking they’ve got half a mind to de-bone us and eat us alive. We said that to them a lot. Maybe we deserve this.

I’m not sure if they’ll barter with us but if we could acquire a little tiny sunken treasure chest we could probably strike up an arrangement. Plus, and we want to stress this, sexual favors are not off the table.

Either way, we’re gonna get a head start by stripping naked and hoping in the barrel.