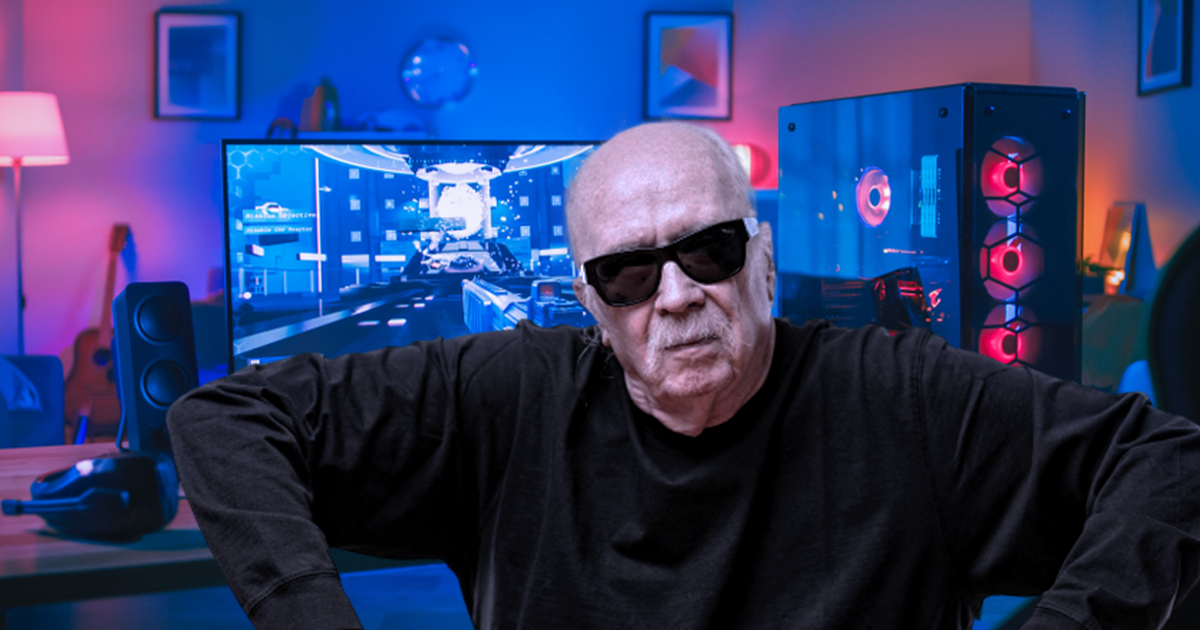 John Carpenter is one of the all-time greats. A legendary writer, filmmaker, and musician whose work includes classics like “Halloween” and “The Thing.” More importantly, he’s one of our favorite “weird old guys” in Hollywood, right up there with David Lynch, Jeff Goldblum, and the guy who hangs out around Santa Monica Pier offering us poppers. And just like those fellas, John Carpenter is the good kind of weird.

We were thrilled to sit down with the iconic director and, after offering him a sizable check, he agreed to an exclusive interview.

The Hard Times: Mr. Carpenter, thank you for having us –
John Carpenter: My pleasure. How about that check?

Oh, of course. Here you go! We all chipped in for this one.
That’s more like it. God, I love getting paid.

Now, our first question is about your work with –
Hold on, why don’t you pick up a controller and help me with this boss. I’m getting my ass kicked!

At this time, the 74-year-old filmmaker insisted that if the interview were to continue, we’d have to help him beat the Kagawata Ball in Borderlands 3. We attempted to ask more questions as we played.

I’m out of grenades! Look, let’s switch focus a bit. How does it feel having created some of the most iconic characters of all time, like Michael Myers and Snake Plissken?
It feels fine. I don’t see my characters that way, you know? Iconic is a strong word. You know who I think is really iconic? Sonic.

Sonic? The Hedgehog?
Yeah! He’s fast as hell! It’s unbelievable. A hedgehog collecting coins and hanging out with his buddy. What’s his name? Tails? Boy, that sure would make a great film. Maybe I’ll direct it.

Actually, they already made two Sonic movies.
Really? Ah well, that’s a shame. I had some far out ideas for that little guy.

Right… Does that mean you’d return to filmmaking any time soon?
Probably not. I mean, who knows? Anything is possible. But I doubt it. Movies are a lot of work and I would rather spend my twilight years not working. Who wants to work? “Work is for workers” is what my father always said. Hey, you smoke?

Cigarettes? No –
Fuck that, here. Take a few. Now let’s start the next quest for Claptrap before my carpal tunnel kicks in.

The director of “Christine” proceeded to feed us a steady stream of Marlboro Reds for the next hour and a half as we looted our way across the hostile world of Pandora. By this point we had completely forgotten that we were supposed to be asking him questions.

(coughing) Fuck, I died! This game is such bullshit… Sorry what were you saying?
Me? I was saying I’m an old man now and it’s great. I get to sit around doing nothing besides gaming. Sometimes I make music but that’s more of a hobby. Gaming is my main focus.

That’s the dream, man.
And the best part is, I still get checks in the mail. You see those “Halloween” reboots? Neither did I, but they paid for this house! Every time they remake one of my movies I get paid. It’s like magic. You should try it.

You’re so right, John. I’m gonna do it. I’m finally gonna finish my screenplay.
Alright! So, did you have any more questions for your interview or are we done here?

Interview? Oh fuck the interview! Uh… any advice for people trying to break into the business?!
Make friends with Kurt Russell, he’s got a lot of pull.

Okay… do you have any advice that’s maybe more accessible than that?
No.

Following our interview, John Carpenter has officially signed on to direct “Sonic the Hedgehog 3: Sonic Goes to Hell” starring Kurt Russell as Shadow the Hedgehog.