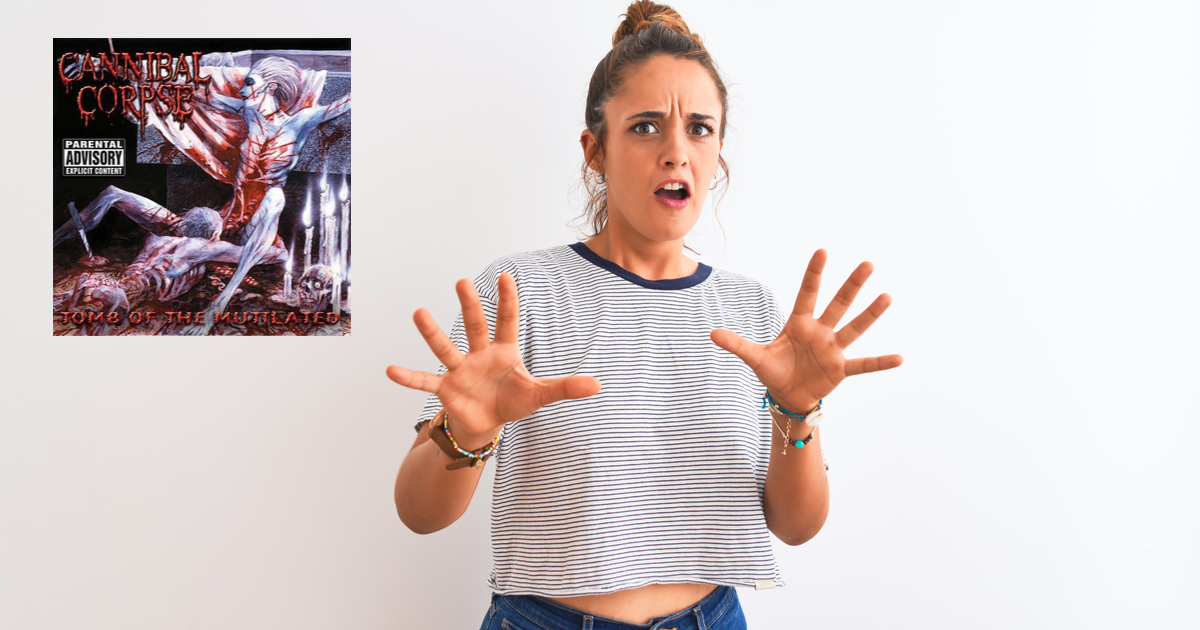 14. “Kill”- Arguably the most pedestrian cover from this band, the artwork simply displays the band logo, the album name (Kill), with a few faint splashes of red to signify blood (Kill, get it?). Frankly, this looks like the band had to throw it together in MS Paint because of a deadline.

RATING: N/A No shower needed. The cover is so tame I made it into a bedsheet for my daughter.

13. “The Bleeding”- Arguably their best album but another lackluster cover. For an album boasting songs such as “Stripped, Raped, and Strangled” and “Fucked With A Knife,” the cover doesn’t properly convey the viscera contained in the lyrics. The artwork is no gorier than a sirloin you could purchase at your local butcher.

RATING: N/A This cover kinda made me hungry, is that weird?

12. “Evisceration Plague”- This is about as extreme as the “Postal 2” cover. At least in that game you could urinate on corpses and shove a gun up a kitten’s ass. The cover depicts what I’m assuming is some maintenance guys waking up Iggy Pop a little too abruptly. The palate is also incredibly dark, as if the artist was trying their best to hide the cover from us. My grandma has cataracts and I could probably wear this shirt in front of her.

RATING: N/A though now I am thinking of my nana.

11. “A Skeletal Domain”- Honestly, I’m still more scared of the “Night On Bald Mountain” scene in “Fantasia” than I am by this cover.

RATING: N/A Still thinking of my nana. I used to watch “Fantasia” with her.

10. “Red Before Black”- Okay, now we’re getting somewhere. No gore, but plenty of blood. The power of this cover is that it casts you, the viewer, as the one being murdered.

RATING: I’ll rate this with the ¼ cup of water I sipped while looking at it.

9. “Eaten Back To Life”- I might get shit for this one but just because it was the first doesn’t make it the best. Yes, the band laid the groundwork for all future covers, but it’s still tame compared to later efforts. There aren’t any weird bug hybrids or people impaled on meathooks. Just a dude eating his own intestines in a graveyard, which honestly seems like a suitable place for that activity.

RATING: I poured a ½ cup of water in honor of this being the first.

8. “Gore Obsessed”- No here’s a more refined version of “Eaten Back To Life.” Complete with weird grabbing arms, a cape made out of literal face masks, and naked half-ladies (as opposed to half-naked ladies), Cannibal Corpse reminds me of the great Native American using every part of the buffalo. Except here, they’re using every left over special effect from a Herschell Gordon Lewis movie.

RATING: At this point, I had to dab my forehead with a cool, damp cloth.

7. “Gallery Of Suicide”- A further evolution on the complex themes of gore, this cover has another popular Corpse theme: dead bodies hanging on shit. Another fairly tame outing for the band as the suspended corpses are relegated to the background. However, the corpses in the foreground are quite striking and the cover contains another popular aesthetic theme: mutilated naked women.

RATING: I splashed a little water on my face for this one.

6. “Torture” – Okay, now these are starting to get a little fucked up. That’s…that’s a lot right there. This time the hanging corpses are way up in the front and, oh God, is one of them pregnant? How do you even think of this shit? I mean, I’m no stranger to gore but this just seems cruel to the viewer.

5. “Bloodthirst”- WHAT. THE. FUCK. IS. THAT. THING? Some kind of bug creature? A mixture of The Thing and the Mindflayer? I hate it and I want it to die. Also, did it kill the corpse? Or IS it the corpse? Is it going to eat the corpse and OH GOD I JUST SAW THE FACE ON ITS SHOULDER ITS GONNA ABSORB THE CORPSE! FUCK.

4. “Vile”- Okay. Okay. It’s over. This one seems tame compared to the others. A little Clockwork Orange on the face but otherwise pretty OH GOD I JUST SAW THE SEVERED DICK IN THE MAGGOT FIELD!

RATING: This is the first time I’ve ever worn a cup and jockstrap in the shower.

2. “The Wretched Spawn”- AHHHHH FUUUUUUCK! I didn’t know it could get worse than Butchered At Birth, but it did. You might think oh, what could be worse than a half-lady having babies cut out of her by skeletons surrounded by suspended dead babies? Well, the answer is give the skeletons a winged demon friend, replace the babies with a hybrid spider-baby spawn, and oh yea it’s a live birth from BOTH ENDS! I’m starting to think these guys failed high school health class.

1. “Tomb Of The Mutilated”- I guess this is the “winner.” Just. Ugh. I… This is the only cover to feature a “sex”(?) act. A half dude going down on a half lady, both of their sex gonads removed. The most upsetting and confusing part of this one is trying to piece the order in which these things happened. Were they fucking and then got murdered? Were they murdered and posed like this? Did one of them die first and then the other was forced to perform on the corpse? And that skull in the bottom right corner honestly looks like he was on his way somewhere and then stumbled into this tableau, an unfortunate victim of circumstance. He’s making the only face my soul knows how to feel now. I’d say I’m disgusted, but I don’t think I know how to feel anymore.

RATING: I’m writing this from inside the shower.