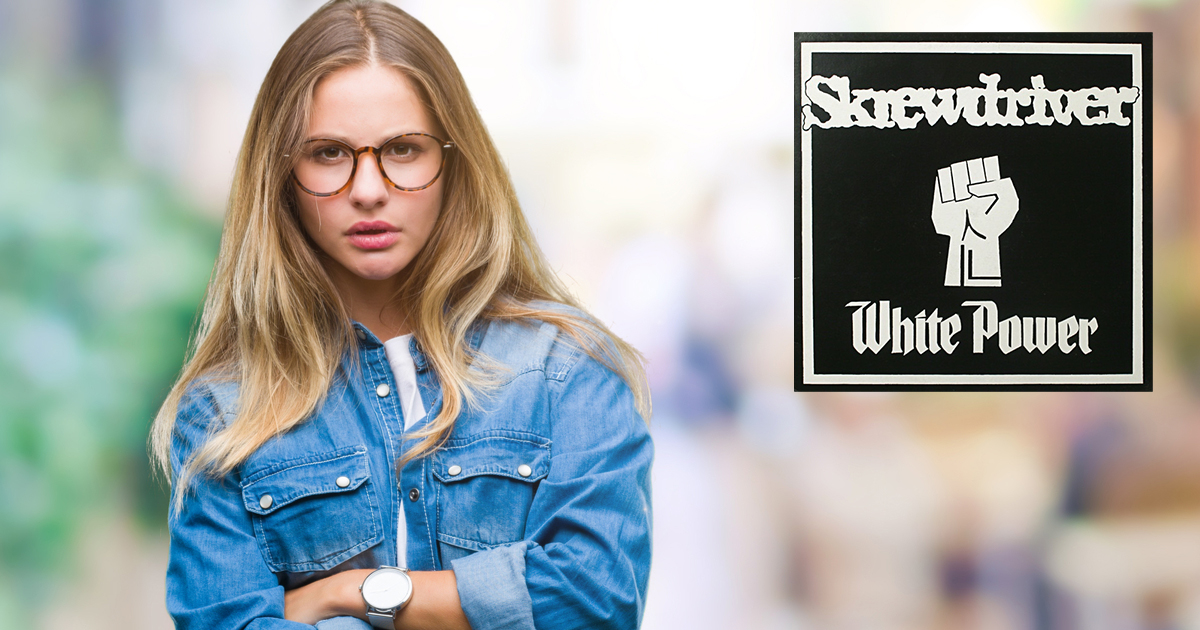 Today, we have ranked every single one of UK white supremacist band Skrewdriver’s full-length albums— but it didn’t have to be this way.

If you had just gotten off your ass and done something—anything—to prevent us from listening to seven hours of Nazi punk, we could have made this list about Fear or X-Ray Spex. But no. Because of your complacency, we’re giving free publicity to punk’s most evil band. We hope you’re fucking proud of yourself.

A covers compilation. Sounds tame, right? Well, rest assured that Skrewdriver’s cover of “Johnny B. Goode” is titled “Johnny Joined the Klan.” So your inaction has ruined not only our weekend, but also the legacies of multiple rock n’ roll legends. Great job, hero.

This album is named for the slogan of the Hitler Youth and features a song called “Poland.” Maybe we’ll buy a copy on vinyl. Maybe we’ll buy twelve. They could probably use the money for whatever causes they’re supporting right now. Clearly you wouldn’t mind.

Album Highlight: Listening to “When the Storm Breaks” is not how we thought we would end up on an FBI watchlist. If we go down for this, we’re sure as shit bringing you down with us.

Guess what’s on the cover of this one. Go ahead, guess. This is your game, after all. We’re just the poor bastards playing it.

Album Highlight: Our families started to worry about us during “White Warriors,” so check that one out if you want to really appreciate the terrible thing you’ve done.

What’s that? You were hoping we’d put Skrewdriver’s only non-Nazi album at the top? Would that have put your conscience at ease? Tough shit. This album is trash and so are you.

Album Highlight: We were unable to find a track racist enough to satisfy you, monster.

This is the last record Skrewdriver completed before their singer died in the world’s most heroic car crash. He is survived by his neo-Nazi record label, his other band “the Klansmen,” and all his adoring fans who aren’t busy torturing journalists.

Album Highlight: We think you could really learn a lot from “Time to Die.”

We’re tired. We’re so, so tired. But we have to remain strong. We won’t crack no matter how much beastly shit you shove down our throats. Go on, laugh. Laugh at us through your pointed hood. You make us sick.

Album Highlight: “Hail and Thunder” is actually the jam.

We didn’t actually listen to this album. Halfway through “The Evil Crept In,” we retreated to a safe space deep within our minds where you couldn’t hurt us. Psychologists call this ‘dissociation,’ and it’s a common response to hostage situations.

Album Highlight: We’re thinking about sending your mom a recording of “Their Kingdom Will Fall.” You know, just to show her the kind of stuff you’re into these days.

Here it is. The one that started it all. You probably recognized the title from those British Union of Fascists newsletters you get. Fun fact: the song “Tomorrow Belongs to Me” was taken from the stage musical Cabaret. But you already knew that, didn’t you, Satan?