We Put 1,000 Monkeys in a Room With 1,000 Typewriters to Prove Some Jackass Point and They Didn’t Write Anything and Some People Got Hurt and We Are in a Lot of Trouble 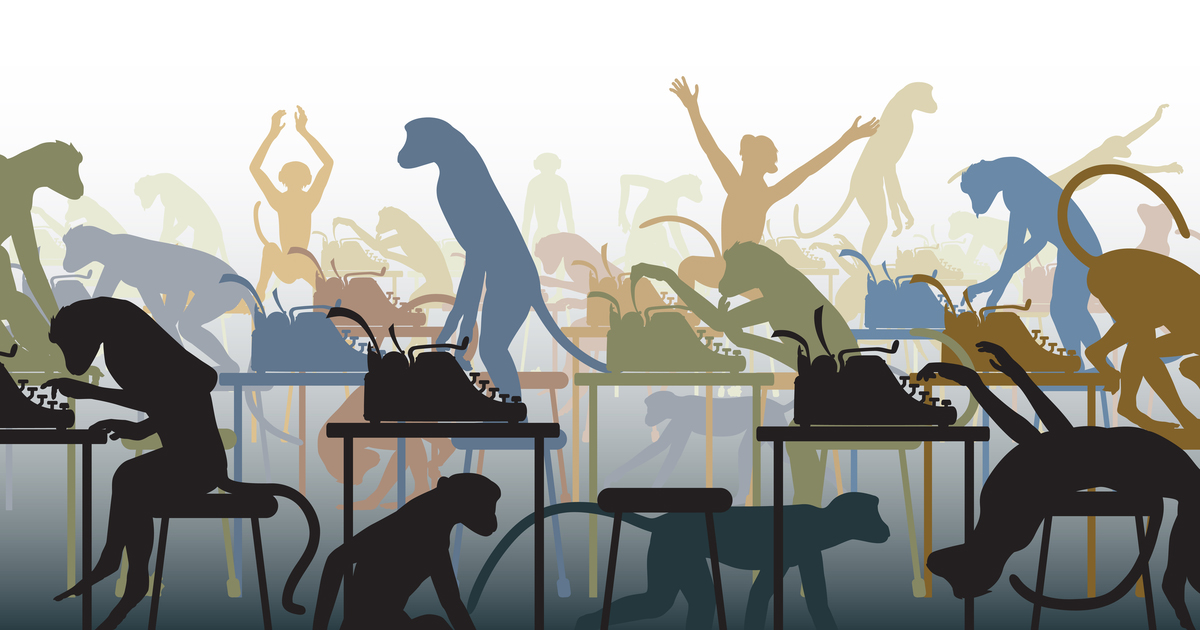 Well, it would appear that we underestimated the lyric-writing ability of Aerosmith by just a tad. It all started with a joke about that old adage “1,000 monkeys in a room with 1,000 typewriters given 1,000 years will reproduce the works of Shakespeare.” Someone cracked that it would probably take them 3 minutes to bang out the lyrics to “Pink.” We all agreed it was the funniest joke in the world, and then someone (NOT ME!) says “Hey, wouldn’t it be funny if we really did that?”

Well, it turns out something that’s funny on paper can be the most horrifying and devastating experience of your entire life when put into practice. Every step of bringing this idea to fruition got us into deeper and deeper trouble legally, financially, and ethically.

Let’s start with step one: procuring the monkeys. As we quickly found out, not only are reputable animal handlers expensive, but they do not typically deal “in bulk.” Finding a dealer who could hook us up with that many primates at once in our price range took us down some pretty dark roads, figuratively and literally. Did you know that there are still opium dens? Anyway, we wound up working with a one-eyed Australian man named Shivy.

After swindling an antiques society into believing that we were assembling a museum display on the history of the typewriter, we had a Ramada Inn conference room full of antique typewriters, each one valued at “priceless,” awaiting their respective monkeys.

Shivy showed up with his monkey truck, and immediately there were issues. I don’t know many groups of 1,000 monkeys, but I can just about guarantee this was the saddest and scariest group of 1,000 monkeys you could ever meet. Many of the monkeys were visibly sick. Many were hyper-aggressive. Some of the monkeys were visibly sick with something that was making them hyper-aggressive.

Some of the monkeys were clearly just human babies in monkey costumes. I don’t know how that was cheaper, but that’s what the guy gave us.

We confronted Shivy about the state of the monkeys, but barely got a word out before he fired back, “Is you callin Shivy a lia?!” Then he started making this big production out of telling us what happened to the last guy to call Shivy a liar, like he was trying to win some “scary Australian-being” contest. It was clear that talking back to Shivy was a dangerous non-starter, and to quote another old saying, sometimes there’s nothing left to do but set the timer, watch the monkeys work and let the chips fall where they may.

Would you believe these monkeys did not type word one? Nope, too busy killing, raping and eating each other like, immediately. Some of the savvier ones did find the priceless typewriters useful as bludgeoning tools. I had never before seen so much blood and viscera, and that was before the Ramada Inn staff came into the hall with the brunch buffet we forgot to cancel. Those monkeys were on those poor workers like Ramada Inn guests on a brunch buffet. The few that did survive were the ones unlucky enough to discover that the virus making those monkeys so aggressive could jump to humans.

Long story short, the infected monkeys and hotel staff broke containment and we’re getting a lot of fingers pointing at us from a lot of different directions. I guess it’s like, not a zombie pandemic, but like not not a zombie pandemic? Who knew that executing one joke could make us public enemy number one with the CDC, FEMA, PETA, The Historical Society, The Ramada Inn, the Australian Mafia, the Police, the F.B.I. and countless families of victims all at once?

At least we learned our lesson. Next time we try this, it will be much smoother.