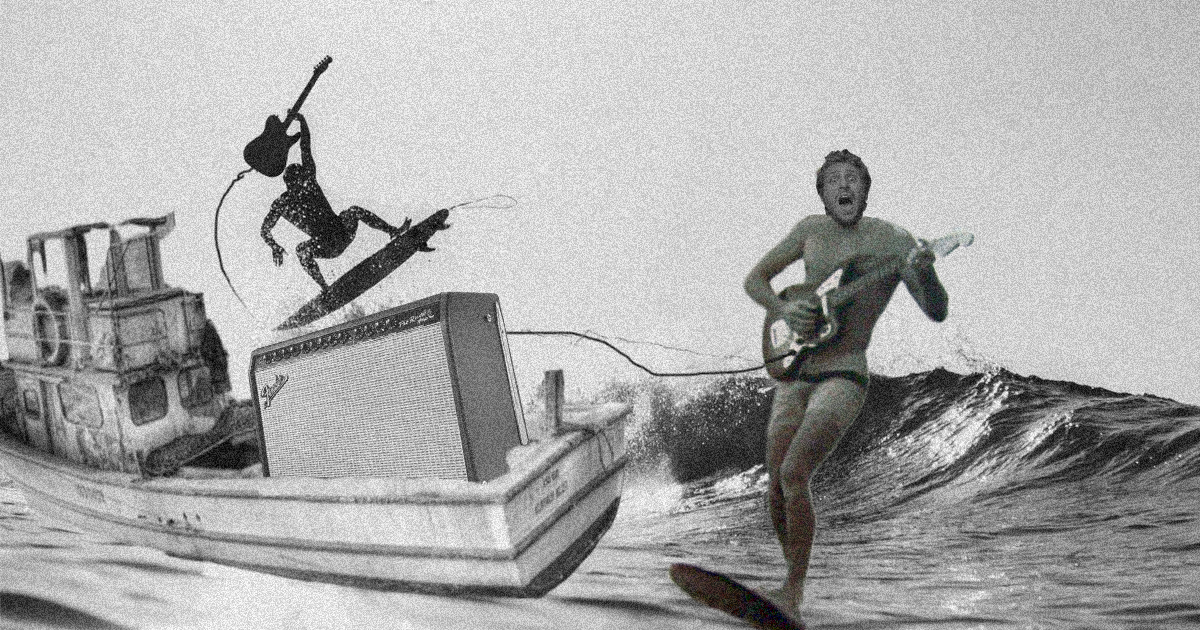 To many, February 3, 1959, will forever be known as “the day the music died.” But for fans of surf rock, that moniker would be taken by an even greater tragedy just five years later.

Today we look back on August 30th, 1964, the day that four of surf rocks biggest stars died tragically while playing electric guitar on surfboards.

Mudge Peters, Scoop Willson, Ponz “Grifter” Heartman and Slaps Coughlin will forever be known as the kings of surf rock. Hard Times has tracked down surviving friends, family, and bandmates of “The Groovin’ Four” who bore witness to their gruesome death. What follows is an oral history of that infamous day:

Hutch Towers – bass player
We knew it was the end of the summer. What we didn’t know was that night would be the end of an era.

Lucy Lux – girlfriend of Scoop Wilson
It was just a bad idea. Everyone thought it but nobody said it. I wish I said it. It was just dumb.

Nicky Preese – Slaps Coughlin’s best friend
Slaps and me were hangin down by the boardwalk smoking Lucky Strike cigarettes and scoping teenagers and all of a sudden Slaps turns to me and says “Hey man, I got a wild idea… Surf Rock!” I said to him “Slaps, there already is Surf Rock! You’ve been playin it for years!” and he says “Yeah… but not on a surfboard!” Slaps ran to the nearest payphone like a bat outta hell and before you knew it the whole gang showed up!

Pete Boss – publicist
Slaps was all about taking Surf Rock to the next level. By 1964, Surf Rock was king and Slaps thought a stunt like this would keep it that way for decades to come.

Flip Hotts – radio personality
If you told me today that Mudge Peters, Scoop Wilson, Grifter Hertman and Slaps Coughlin were going to do dueling guitar solos while riding surfboards, in the water, I would say “Hey, that’s a really bad idea!” But back in 1964 I said “Hey, that’s dynamite!” It was a different time! No one had ever done it, so there was no conceivable way to tell it was dangerous.

Hutch Towers
Well before you know it everybody’s loading up power generators and amplifiers onto these boats that were supposed to follow the surfboards with really long extension cords.

Pete Boss
The guy doing all the wiring had a needle in his arm.

Jerry Camero– surf rock fan
I remember saying out loud “What could go wrong?!” And then I kept just sort of repeating those words. It was like, was I trying to tell myself something?

Nicky Preese
A couple of people raised concerns over electrocution. I think it’s cause everyone was so occupied preventing that, no one even considered the possibility that those electric guitars would attract all of those damned sharks!

Flip Hotts
To this day it blows my mind that those four men died of shark attacks and not electrocution. I mean it’s unbelievable. It’s actually sort of a miracle.

Hutch Towers
Some of the sharks got electrocuted but that just seemed to make the sharks angrier and stronger.

Jerry Camero
There was so much blood. When I close my eyes at night I still hear the screams but also the solos. Hot damn could ole Scoop Wilson shred, man!

Pete Boss
Well that was that for Surf Rock. No one wanted to play music at the beach that was known to attract sharks.

Nicky Preese
I remember going to see Pulp Fiction and when that theme song played I thought “Finally, people have forgotten about those electrified sharks.”