We Look Back on McDonald’s Failed ’90s Burger Campaign: “We Know 9/11 Is Coming” 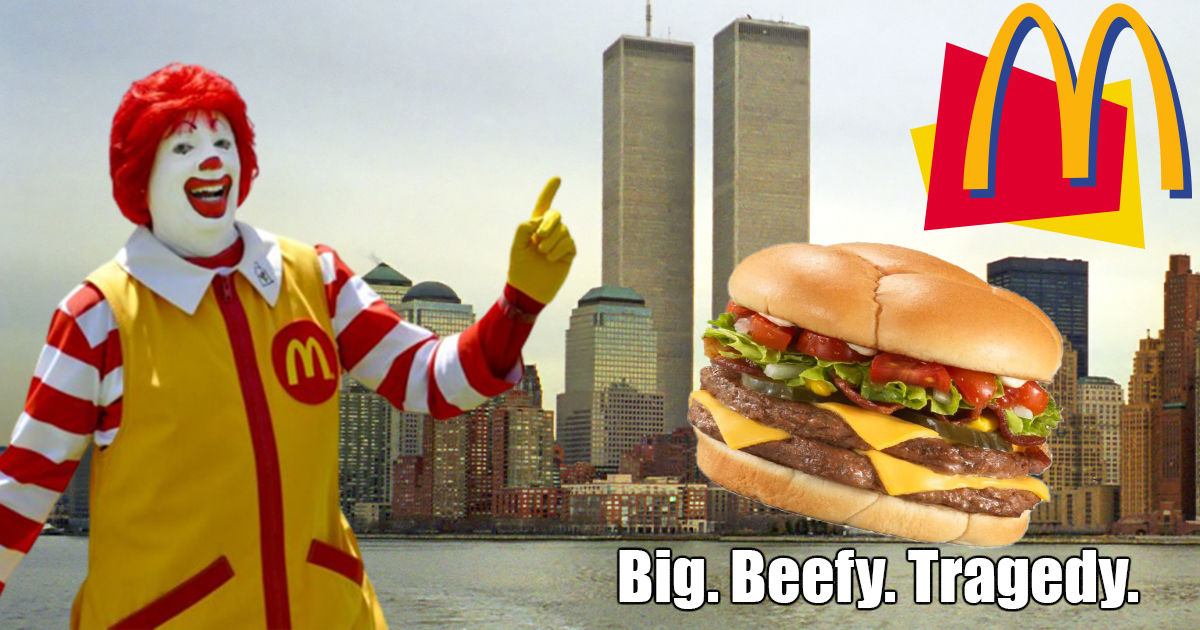 No one can deny that McDonald’s is one of the most successful, recognizable, and beloved businesses in American history. We can all agree that the memory of childhood comfort afforded by eating a McDouble and a Spicy Crispy Chicken sandwich back to back is well worth a day on the toilet.

However, even McDonald’s has had some high-profile, embarrassing failures, like the infamously environmentally destructive McDLT, the water, and seaweed-filled McLean Deluxe, and, of course, their notorious 1990s campaign “We Know 9/11 Is Coming.”

Everyone is familiar with how the McLobster Sandwich crashed and burned under a prohibitive $5.99 price and the fact that no sane person in the entire world wants fucking McDonald’s lobster, but not everyone remembers the “We Know 9/11 Is Coming” campaign and its flagship Mc9/11 Burger.

It’s not an accident. McDonald’s has spent millions trying to cover up the fact that they once produced and marketed a burger that desperately pleaded with the American people to pay attention to the rising issue of militant religious extremism in the Middle East, for a great low cost!

After the failure of McSpaghetti in the early 1990s, McDonald’s started doing heavy market research into what consumers wanted in a burger as part of their competition with Burger King, Wendy’s, and to a lesser extent, home-cooked food.

The McThinkTank soon exceeded its mandate, however, discovering evidence that the CIA had funded extremist Mujahideen fighters in the Soviet-Afghan War, which led to the founding of Al Qaeda by Osama Bin Laden in 1988, and that Khalid Sheikh Mohammed had devised the basic idea of commercial airliner suicide missions, and that Americans were increasingly concerned with the fat and sodium levels in their food.

This led to the creation of the Mc9/11 Burger, a sandwich composed of a quarter-pound, all-beef patty, grilled onions, special sauce, and a slice of semi-Monterey Jack cheese, which was described at the time as “adequate.” Every purchase of an Mc9/11 came with one of five randomly chosen toys, all of which were miniatures of various landmarks McDonald’s suspected Al Qaeda was targeting, including the White House, the Los Angeles U.S. Bank Tower, and McDonald’s own Hamburger University.

At the time, diners were confused by the marketing slogan of “Please, Thousands Will Die” and the national commercial spot in which Ronald McDonald explained at length how US intelligence agencies were fatally refusing to share information with each other. The Mc9/11 Burger was swiftly discontinued, joining the likes of the McAfrika, Onion Nuggets, and a shared sense of safety in America!