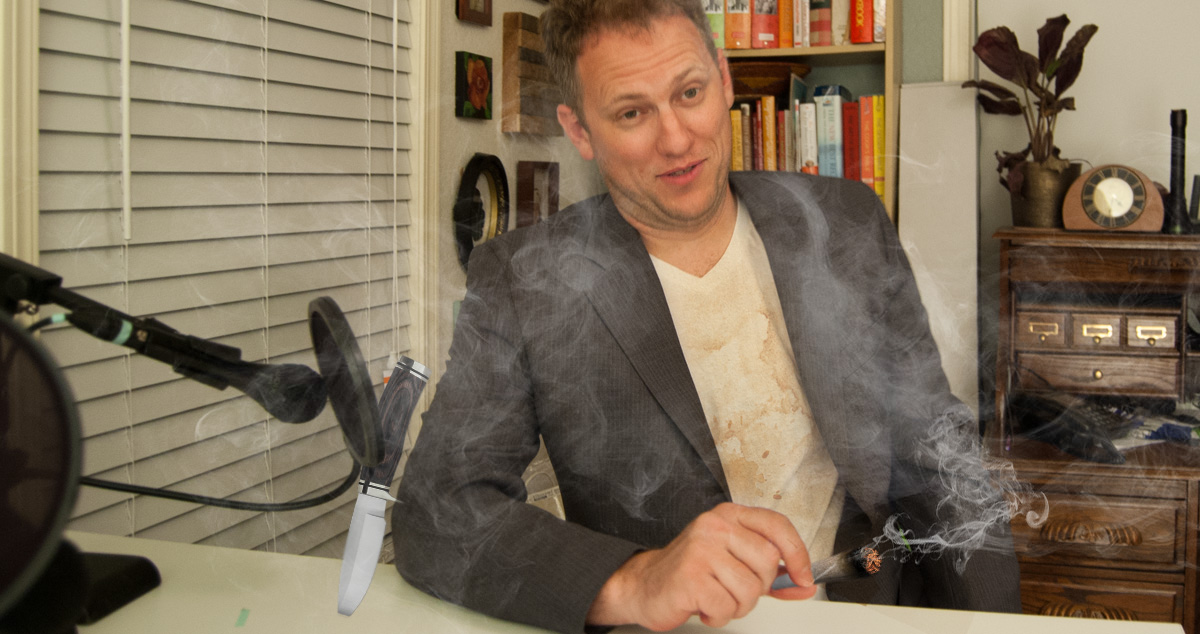 We don’t normally allow smoking of any kind inside the Hard Times office but when someone like Woody Harrelson stops by for an interview, you make a exception, right? Well that’s what we thought when we let the veteran actor smoke a whole bunch of pot in our reception area.

What follows is an oral history of the events leading up to the realization that not only had no one scheduled an interview with Woody that day, but that wasn’t even him.

Adam Martin, receptionist:
“He smelled like Worcester sauce, but like, old Worcester sauce? But whatever, I’ve heard Brad Pitt never bathes. That’s just like a celebrity thing, I guess”

Allison Mick, chief meme correspondent:
“My first impression was “He’s scrappier looking in person.” My impression immediately after that was, “I’m not sure that’s him you guys,” but I didn’t say that one out loud because I thought I would sound dumb.

Mark Bouchard, senior juggalo correspondent:
“I asked him what it was like on the set of Natural Born Killers and he went on and on about the snake scene for more than an hour. I mean, I think it was a story about that scene. It was definitely about murder and drugs in the desert.”

Steven Youn, film critic:
“Someone said ‘Woody Harrelson’s smoking weed with the Hard Style people,’ and I said ‘Who’s Woody Harrelson,’ and they said, ‘The old guy from Hunger Games!’ So I rushed over.”

Dan Rice, The Hard Times Blog editor:
“Word that Woody had come by spread pretty fast. I remember all of the Hard Times and Hard Drive people kept finding excuses to come over to our side of the office to check it out. People kept congratulating me and Eric on such a great ‘get.’ Somehow, it started to make me feel like a fraud…

Lucas Passarella, drugs/lifestyle correspondent:
“He kept offering a hit and I took one when no one was looking. It was the worst weed I’ve ever had in my life, and it must have been dusted our something because I kept having these horrible peripheral hallucinations.”

Zac Townsend, sex expert:
“I thought to myself ‘Wow, look at how in character he is!’ Then I took a quick peek at IMDB to see what movie he was filming where he was playing an unhinged veteran, but I didn’t see anything. I brushed it off and thought the project must be under wraps, but somehow that didn’t sit right.”

Rob Steinberg, someone’s friend:
“One by one he got everyone stoned on dirt weed and everyone settled in to listen to him talk about Cheers.”

Courtney Baka, scene politics correspondent:
“The realization that no one had actually asked Woody Harrelson to come in that day came slowly, subtly, and without the appropriate amount of alarm.”

Dan Rice, The Hard Times Blog editor:
“In our defense he was pretty knowledgeable about the show Cheers.”

Patrick Coyne, gossip columnist:
“I’ve been mugged a few times before, but never by a celebrity! This was exciting!”

Tyler Lebens, young go-getter:
“This was the second time this company’s gotten me stabbed and I still haven’t gotten an article on the site!”

Michael Civins, office manager:
“At first our insurance adjuster had a conniption fit when we told her we allowed the guy who stabbed four of our employees get high in our office for several hours beforehand, but when I told her we thought it was Woody Harrelson she told me I just needed to fill out form I2-89C. I guess this happens a lot?”