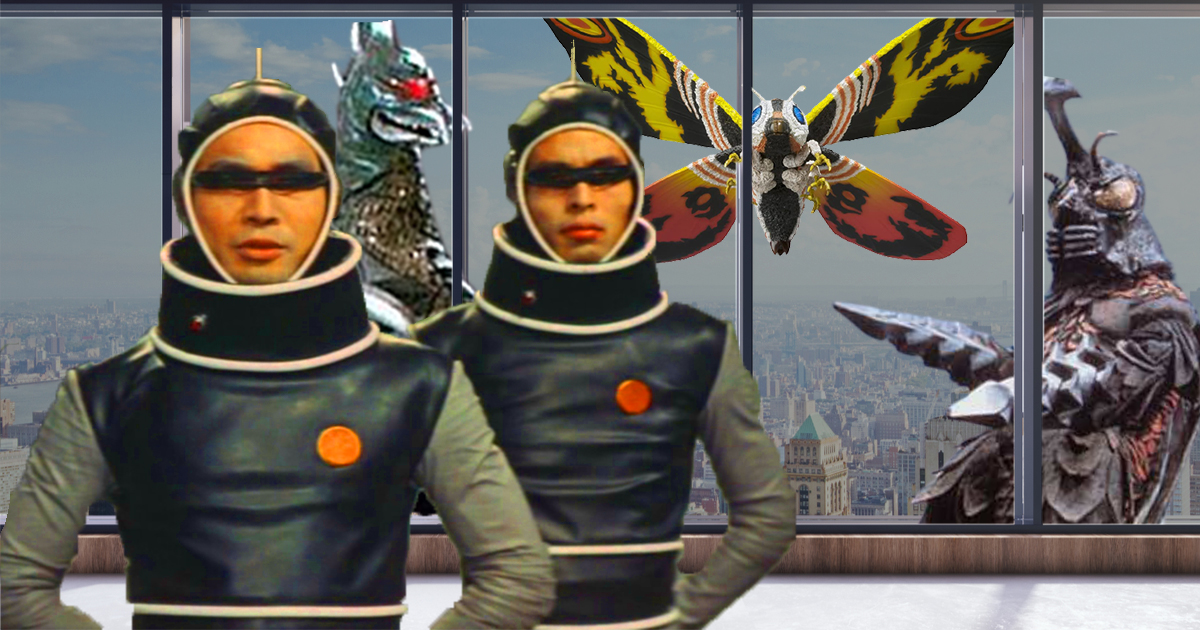 Between the Covid-19 pandemic and the recent rise in giant monsters attacking major cities across the globe, we haven’t been able to travel much lately. That’s why we were pleasantly surprised when we scheduled an Interview with Japandroids and they insisted on doing it in person on a small island off the coast of Indonesia! Unfortunately, when something sounds too good to be true it usually is.

The second we touched down on Infant Island something seemed off. There were dozens of Kaiju, but they appeared to be in some sort of dormant, trance-like state. We were greeted by a battalion of soldiers wearing goofy helmets, the leader of which told us that the monsters would not attack us, and that he had orders to escort us to control tower one.

I remember thinking, “What is the Canadian band responsible for arguably the greatest rock album in the last 10 years doing on an island surrounded by monsters with their own personal army?”

The Hard Times: Before we begin I just want to say thank you so much for flying us all the way out here just for an interview most bands would just do on Zoom. Really classy of you guys!
Both Japandroids Speaking As One: From this tower, we cannot be defeated!

Okay, sure. What is this place exactly, did you start your own studio here?
This tower is now the highest power in the world! None will be left to oppose our rule!

Okay! Wow, you guys are really going all-in on this new gimmick of yours. What is it exactly, are you doing like a sci-fi concept album?
Our only concept is the obliteration of all earth cities and governments. The remaining populace will be used as labor.

Hmm. Are you at all worried that the band’s new direction will alienate long time fans?
Foolish human! We know not of this “band” you speak of.

Wait, are you Japandroids?
We are Androids.

The ones from Canada who made “Celebration Rock”?
We are the Androids of Planet Zero!

Dammit! I knew something was wrong here. Wait, so you’re the ones responsible for all of the recent Kaiju attacks?!
Correct! From this tower we broadcast our master signal, making the monsters of Earth slaves to our will!

That makes sense! Godzilla was always a wild card but I knew Mothra wouldn’t have turned on us on his own!
Soon the governments of your world will surrender unconditionally, and we will begin terraformation! There is no hope!

Well that sucks. Plus I didn’t even get to interview Japandroids before the world gets destroyed.
You are interviewing the new masters of the world. You will go to your media controllers and spread word that all resistance is futile!

Japandroids interview would have been cooler.
You will tell us more about these Japandroids. Are they your leaders?

No, they’re just a cool band. They did that song “The House That Heaven Built.” Here, I’ll play it for you.
We have no use for your planet’s musical duo’s. We heard one when we arrived here on Infant Island and it was not for us!

You mean the fairy twins that guard Mothra?
Correct.

Yeah, that song sucks. Listen to this!

That’s when I took out my phone and played “The House That Heaven Built.” I guess the Bluetooth connected to the control tower because it started blaring from everywhere. At first, the android dudes were all like “Stop this! Seize them!” but then they started tapping their toes and bobbing their heads. By the end, the androids, soldiers, and all of Earth’s Kaiju were bumping their fists to the music.

You betcha.
In that case we will call off our attack and spare your world.

Dope!
Then we will find a planet that has no Japandroids, and claim their music as our own!