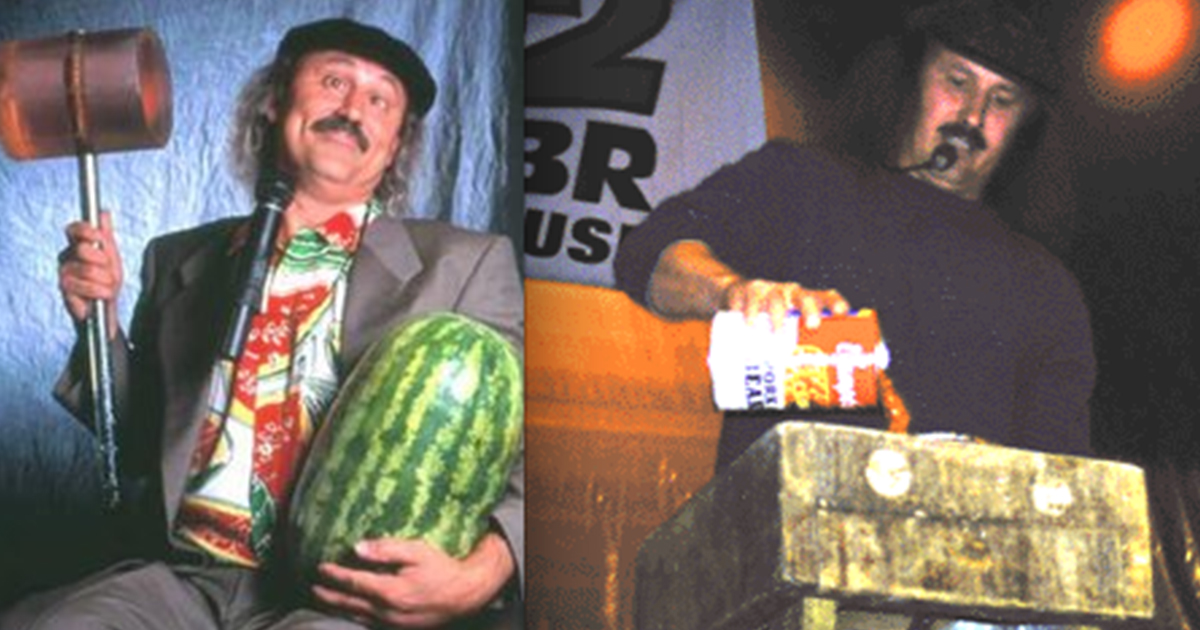 I don’t know how our booking agent has managed to stay on this far but god dammit if this isn’t the absolute last fucking straw.

We were poised to interview Liam and Noel Gallagher about how their well documented contentious relationship helped shape their music. Sound like a hugely exhausting bummer? That’s exactly what we thought! So imagine our surprise when we walked into the hotel room to somehow find ourselves in an even WORSE situation.

Here is our exclusive and extremely sticky interview with two Gallagher brothers somehow even more toxic than the founders of Oasis.

The Hard Times: Hello? Hope it’s okay we came in, this is the time we were given and the door was open.

The suite seemed empty, save for a large watermelon on the coffee table. We were about to leave when suddenly an insane man with a mallet leapt from the bathroom.

This aging beret and suspenders clad mad man suddenly pounced toward the watermelon with the grace of a gazelle and smashed it to bits, covering us in watermelon guts as our booker’s mistake became clear to us.

Galagher: Call me Leo! Unless you voted for ole Sleepy Joe Biden, then don’t call me at all! Haha, I got a million of em!

Somehow the watermelon had already been replaced with a fresh one, which Gallagher immediately smashed in celebration of his awesome Biden joke.

Okay hang on, we booked an interview with the Gallagher brothers. So you had to have known we didn’t mean you.

Gallagher 2: Did somebody say brother?!

A second, nearly identical mallet wielding psycho emerged from the bathroom, leapt toward the coffee table where the melon had again been replaced somehow, and smashed it all over us.

Ah fuck, I forgot, there’s two of you.

Gallagher: Hello Ron! Say, you owe me a bunch of money!

The two men then began sort of duel watermelon smashing at each other, each melon inexplicably being replaced as soon as the last one was smashed by some unseen hand.

Gallagher: He just a minute buster brown, you were supposed to interview us about our rivalry!

Gallagher 2: I bet the lesbians got to him! They’re always trying to silence us!

Gallagher 2: You just wait until Trump gives JFK Jr. the okay to come out of hiding and take the country back buddy! He’s gonna shut your whole left-wing jew run media down once and for all!

Gallagher: Oh, we’ll give you a shower all right!

Gallagher 2: A Mallet shower! Let’s get him Leo!

Spry as they were, outrunning two elderly men lugging giant mallets around was pretty easy. If that had been the real Gallagher brothers, and they were still doing hard drugs, I might be dead now!