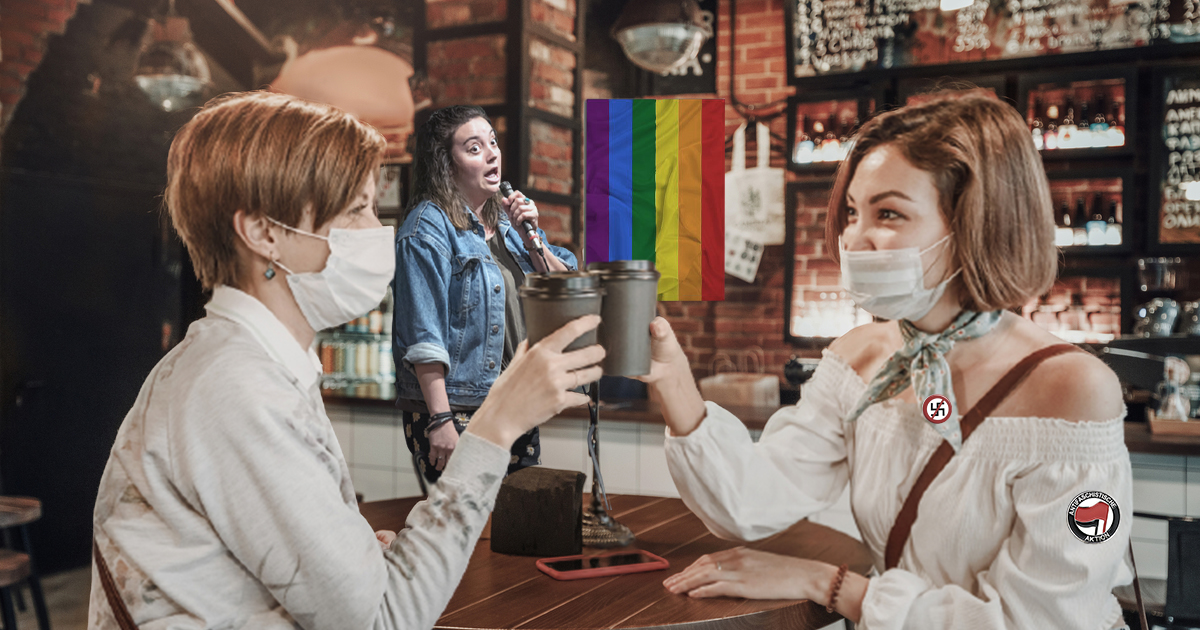 According to our president, Antifa is the greatest threat facing America today, and yet so little is known about them. By avoiding high profile crimes and not actually appearing anywhere in mass or doing anything of note, it’s as if Antifa did not actually exist in any organized capacity whatsoever. We at The Hard Times decided it was time to lift the veil.

I had spent weeks following up on leads of potential Antifa leaders and came up with nothing but some pamphlets on Democratic Socialism and a few solid connections for molly. I had almost given up hope until I serendipitously clocked a crossed-out swastika pin on my barista’s cardigan. I knew that anyone who hated Nazi’s that much had to be a part of a dangerous Antifa terrorist militia. This was my white rabbit. I hung around until their shift ended and followed them.

After tailing my suspect to the Apple store and a ramen noodle place (which was delicious by the way) they finally led me to their Antifa meeting down at the old yarn factory. The camp was not quite what I expected from anarchists operating out of an old factory. I kept scanning the place for obstacle courses, pipe bombs, and krav maga instructors. All I saw was a stage, a bar, and a bunch of band stickers. They even had a legit liquor permit and, if I’m being honest, had cleaned the place up quite nicely.

These Antifa operatives were so cunning that they had created a hip but unpretentious and welcoming environment, just to hide in plain sight. Diabolical.

I was instructed to write my name and preferred pronouns on a list. I wanted to fit in but not give away my true identity, so I hastily signed the name Dean Moriarty and listed my pronouns as Cuck/Mask Wearer.

Soon the M.C took the stage. They began the evening with what appeared to be some lighthearted and inoffensive anecdotes about their cat. Already my mind whirled trying to put the pieces together. Was the cat a bomb? When was it all going down? Did they suspect that I was a journalist?

These people were even more well-orchestrated that I had thought. If they were plotting the destruction of America, they were doing so in code. In fact on the surface, they appeared to be a loosely knit collective of people encouraging self-expression and supporting each other. To the untrained eye, it was actually, like, really nice.

Then I heard the host call up my alias name. Apparently that list was some kind of sign up sheet. I nervously approached the stage, hand clutching the smoke bomb in my pocket tight, ready to make a daring escape.

As I approached the stage my mind scrambled trying to piece together their terrorist code. Grindr, wet ass pussy, cats, what did it all mean?

With nowhere else to turn, I busted out some standup I had been workshopping at the time. It went okay actually, got a few big laughs. Some of the terrorists even complimented me on a few jokes after my set. I’m going back next week.

Honestly, if America’s most dangerous terrorist organization keeps buttering me up like this I might have to suicide bomb a police station or whatever. They are SO NICE you guys!