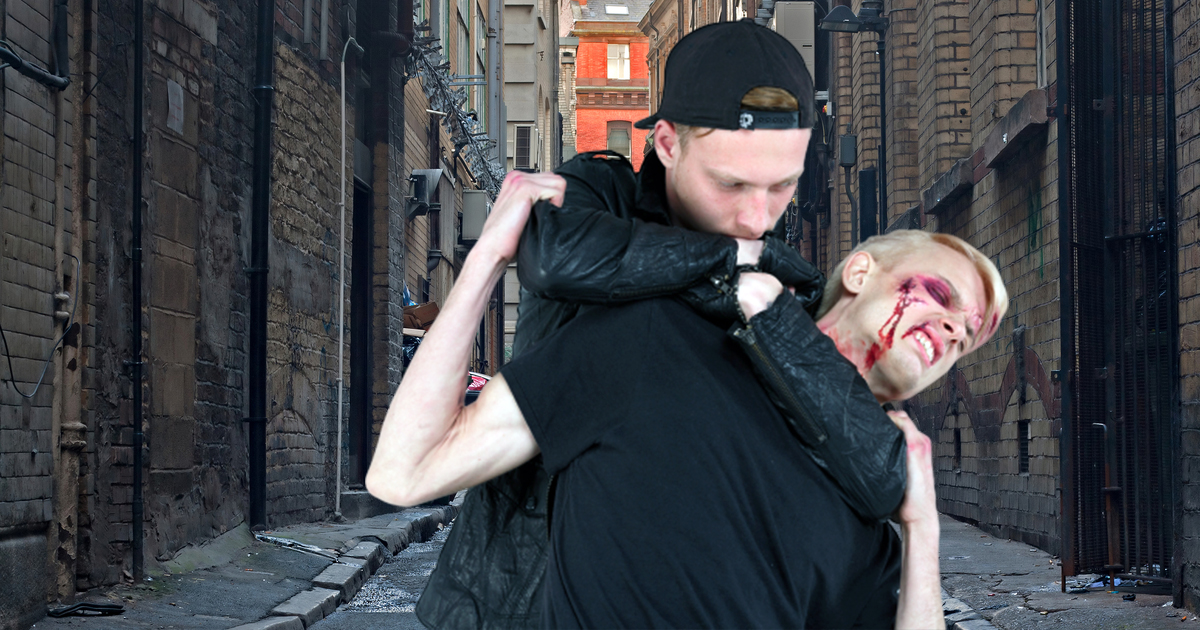 The Hard Times recently caught up with the hooded young man who ran up behind me and grabbed my Jansport backpack in a crowded outlet mall before running away. We gave chase, and we got the scoop, baby!

Our first question was: “Hey man, are you fucking kidding me?” to which this man, who we later realized was also wearing a Jason Voorhees mask, responded by punching me in the stomach real hard. Like, “knock the wind out of you” hard.

He ran away again, but we picked up the pace and managed to get the real scoop.

As we approached him getting into the backseat of a 2009 Honda Accord with other masked men in the driver and passenger seats, we of course had to ask: “Hey what’s your problem?”

At this point, we managed to get an exclusive statement from the man’s two accomplices, and by “statement”, I mean they both got out of the car and kicked me a bunch until I fell to the ground, and then they kicked me way more. It’s clear we had to find a new strategy.

As they drove away, I slowly rose to my feet and managed to interview a young woman passing by to get an outside perspective on the scene that unfolded.

“Hey did you get their license plate?” I asked, to no response. It was time to branch out for a wider perspective.

“Can you please help me? I’m in so much pain,” I communicated to a number of passing folks. They all refused to comment, or at the very least, to let me use their phone to call an ambulance since mine was in the backpack. However, The Hard Times has obtained video footage of the attack, posted to Twitter from an account named “AsssKickings69XD”. The video has been retweeted 453 times.

Stay tuned for more updates as my bruises and internal bleeding heal.