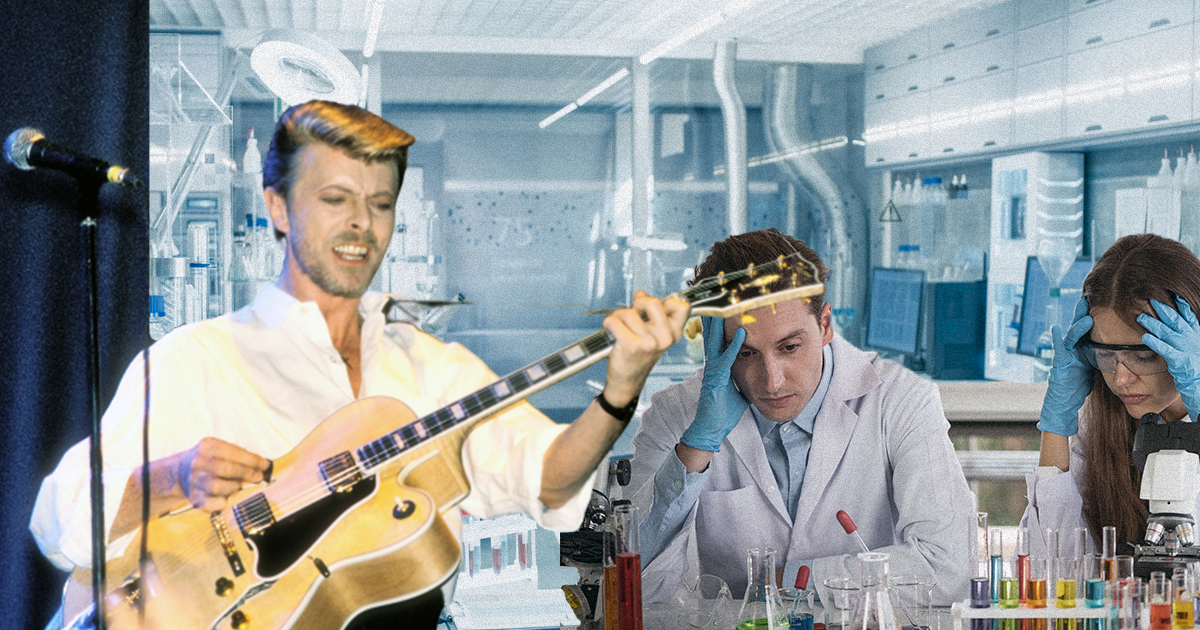 During a Hard Times office party, I said to the higher-ups we should use some of our PPP loan to perfect a way to bring the dead back to life. We all had a good laugh at it. Then the cocaine really kicked in and next thing, we’ve got these Stanford brainiacs working on this.

Wouldn’t you know it, those fucking dorks pulled it off. The Hard Times had acquired the power to bring our favorite musicians back to life and force them to hang out with us lest we send them back to whatever eternal abyss they came from.

Our first choice to resurrect was Joe Strummer, but with the state of the world, we feared he’d be too much of a buzzkill, so that was nixed. Someone suggested G.G. Allin, but we can’t even get people here to wash their dishes, so that was the end of that. Words were exchanged, someone might have been stabbed, but eventually, we settled on David Bowie.

We were all set to hang out with an era-defining genius. Unfortunately, the Poindexters who made this thing didn’t bother telling us about the time/date setting on the device that brings the deceased back from a specific era of their life. So it’s with our deepest regrets that we inform you that we have inadvertently resurrected Tin Machine Bowie.

I first thought I could fix this and talked to Bowie about his earlier work and personas, but he’s just as gung ho about Tin Machine as he was when he was actually alive, so he’s really not listening to me. I showed him some of his future work and thought maybe he’d get excited and get a jumpstart on that, but he keeps saying he wants to use this second chance to really perfect Tin Machine’s sound, so we’re at an impasse here.

The editors told me to handle this or it’s my ass, so my hand has been forced. As I write this, Bowie is sitting in the car. I told him we’re driving upstate to record at Tony Fox Sales farm. He seems to have bought this and my dad told me where he left his hunting rifle, so other than the awkward drive, this should be over fairly quick.

My plan is to lock Bowie in a small concrete bunker with an eyepatch and some orange hair dye. In 24 hours he will either morph into Halloween Jack or be dead by my hand.