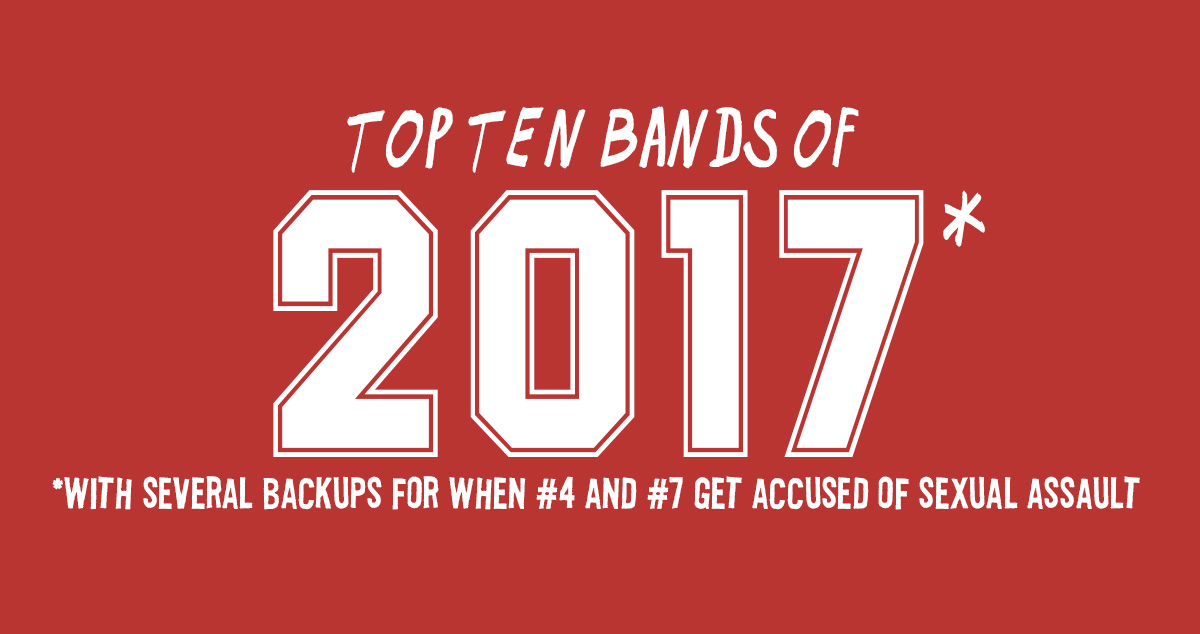 2017 was a banner year for rock music so without delay here are the 10 best bands of the year.

Alongside back ups for #4 and #7 when they get accused of sexual assault.

Sparking a folk rock revival that has rocketed to the top of the charts, it is hard to see Dust to Dust disappearing any time soon. Except for the fact their entire rhythm section are notorious abusers and in six weeks you are going to be tossing out that limited edition vinyl record of their debut album you can never enjoy listening to again.

This is why Dumpster Dude is our back up fourth best band of the year for when that inevitable Dust to Dust scandal breaks. The Dudes have that great folk rock sound you love without any of the sexual abuse baggage that makes you turn to your girlfriend and ask, “Is this what your life was like the whole time?!?”

Related: This Allegation Wave is a Witch Hunt Only in Modern Times and With Evidence and Guilt

What can we say, it has been a great year for conspiracy rock. Who hasn’t watched a “9/11 was an inside job” YouTube video soundtracked by one of these bands and nodded their head along to the sick riffs and lyrics that are insane/borderline offensive to the victims?

You would be lying if you said you didn’t at one point get down and dirty to the electronic-tinged jams of this New York-based four piece and you will also be lying if you don’t feel dirty for still liking this band after an expose in Jezebel next month reveals Ryland ritualistically assaulted his bandmates before encores of their sold out shows.

Fortunately, we got a replacement already lined up in a band named after a dream the leader singer of TBP1518 had while high on what he described as, “a suicidal amount of cocaine.” Even though he will overdose in three months, you can relax knowing he never harmed anyone sexually.

And the rest of the list! Be sure to check out my colleague’s best of 2017 list when my incredibly disgusting sex crimes are revealed in a Twitter thread tomorrow.

Article by The Hard Style Staff