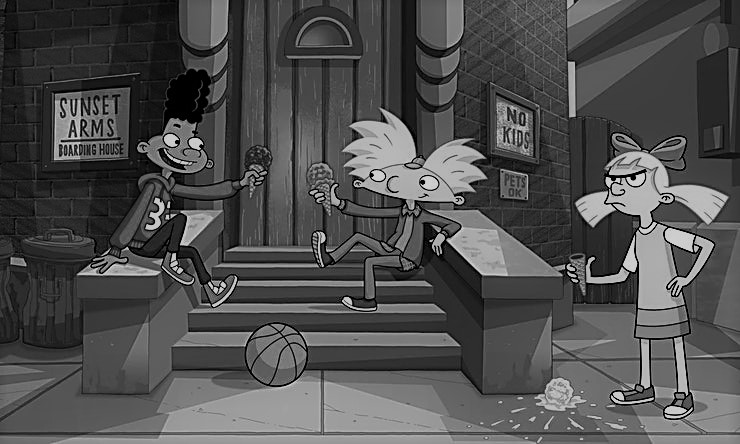 For the past 15 years now, something hasn’t sat quite right with me and I can’t stay silent any longer. Guys, it’s time we admit that Arnold killed his parents.

I’m not sure how he did it. What I do know is that Arnold Phillip Shortman displays reclusivity and has a preponderance for machination. A young child who builds robotic furniture for his self-sufficient one bedroom apartment could easily construct a murder dungeon in between lunch and recess.

The how escapes me, but I know where he buried them: the vacant lot. Think about it. Arnold just HAPPENS to find that lot before transforming it into a baseball field? Fat chance. Why else would he freak out when the grown ups discover the lot? He’s dancing on the bones of his parents.

Related: Only ’90s Kids Will Remember the Subliminal Activation Words Hidden in These Cartoons

All the signs are there. Reclusive attitude, cunning precision, football head. From a phrenological perspective, Arnold Shortman’s skull possesses structural traits typically associated with psychopathy and homicidal tendencies. In particular, reduced accentuation along the areas associated with self-esteem, human nature, and mirthfulness, coupled with pronunciation around areas associated with secretiveness, combativeness, and destructiveness paint a pretty damning picture indeed. And yes, many of you are already clamoring to your keyboards to angrily post in the comments, “Buh buh but he finds his parents in ‘Hey Arnold: The Jungle Movie.’” Listen, I was born in the dark, but it wasn’t yesterday. Surely a child who could orchestrate the death of his parents at age one could hire crisis actors at age ten to impersonate his parents. It’s elementary dear boy.
We’re all supposed to feel bad for Arnold, a child with absentee parents living with socialist grandparents in a tenement building filled with poor immigrants. But in truth, he’s an emotional black hole hell bent on destroying anything that has feelings for him.

His lover, Helga Pataki, displays similarly psychotic behaviors and suffers from clear codependency issues. Despite her undying love for Arnold, she is terrified to display her affections in public for fear of Arnold’s wrath.

Some may say I’ve gone mad, that “Hey Arnold!” is just a cartoon, that he’s not real, that it’s insane to imply subliminal murder in a children’s cartoon. But I ask you this: do you want that cartoon roaming the streets free? How long until that cartoon kills again? I implore any law enforcement officials reading this to arrest this football head. He may be unassuming on the outside, but on the inside he’s a sociopath whose sole purpose is to destroy those whose only crime was to love him.

I know this can be a hard truth to accept, but when you look at the evidence it all becomes pretty clear. Arnold is a killer just as sure as Doug was in a coma the whole time.

Childhood = ruined? Buy one of these t – shirts to cheer yourself up!