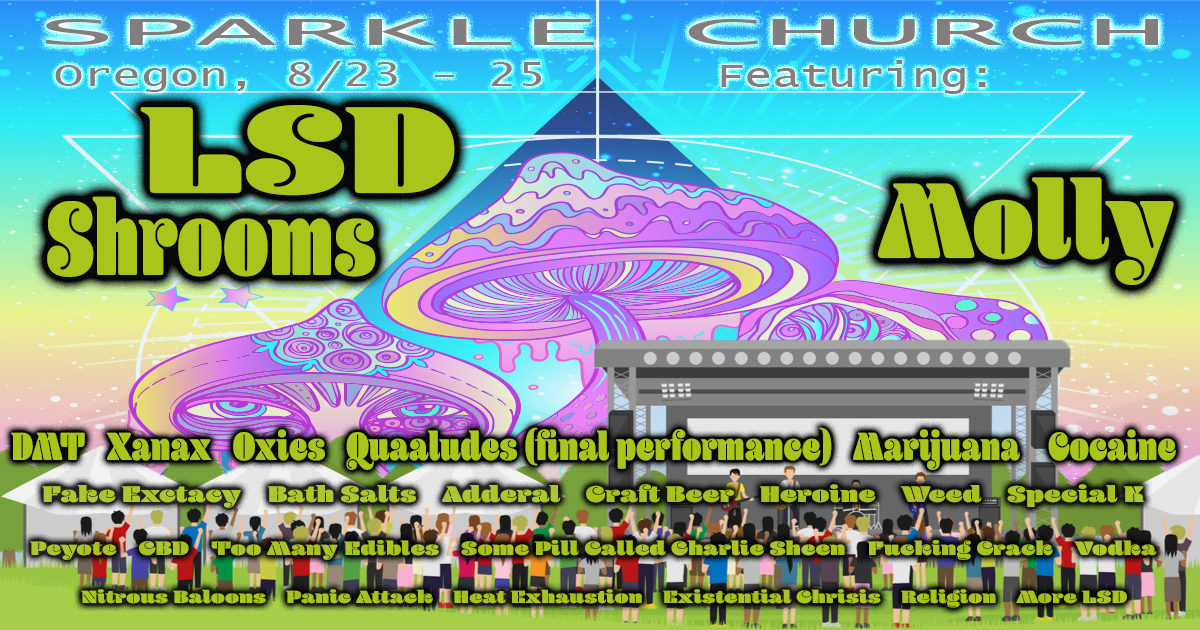 Although Coachella and Paradiso have come and gone, existing now only as a vape cloud of fragmented memories in our Instagram feed, there’s still a slice of summer left to spend fucked out of your gourd on drugs.

I’m most excited about LSD’s headlining spot at the mainstage on Saturday, especially since there were rumors of cancellation after drama over placement. Apparently, Shrooms and Molly were also vying for the Saturday spot but a compromise was made at the last minute to move Shrooms to Friday and have Molly go on part way through LSD’s set, shortly after peaking.

Honestly, that sounds like the right call, since LSD always changes up its style and can get a little weird if you catch it on an off night. It’d be a huge risk to open the festival with a bad trip. Sure, Xanax and Oxy are doing low-key sets back at the campground in case LSD gets a little too intense, but they come through my hometown all the time, so I’m not too worried about missing them at Sparkle Church.

That leaves most of Friday and Saturday for the niche, designer drugs at the smaller stages. I’m particularly interested in checking out N-bomb, since it’s supposed to be a shorter but more intense variant of LSD’s style. I also might pop in to DMT for 15 minutes or so.

Some of the older members in our crew are really looking forward to Quaaludes’ final appearance on Sunday, so I might check that out if I feel like having a chill day.

Needless to say, I’ll be making regular stops at the coke tent throughout the whole weekend. There’s usually good stuff in there, although the lines can get out of hand. Last year, poor planning caused the coke tent to shut down early but they promised to be on top of their shit this time around, so I’m sure it’ll be fine.

In short, it sounds like this Sparkle Church is going to be the best ever—totally worth the $950 price tag. I’ll probably need to take the following week off work just to recover from all the fun but it’s no big deal. I’ll just get dad to cover my rent that month.