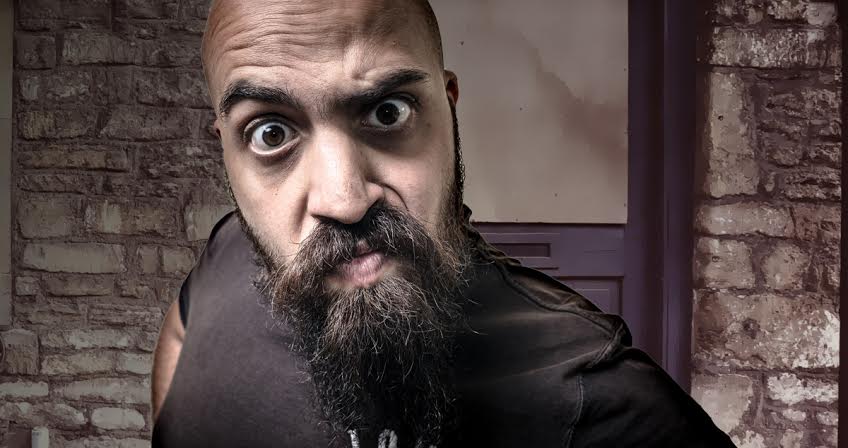 Born in Chicago and raised on Pantera and Sepultura in suburban Illinois, bouncer Dustin Hoff, is well known around the Peoria music scene as, “That huge asshole with the face tats that loves to choke people the fuck out.” Hoff, who was in the middle of his daily ritual of strenuous calisthenic exercises, sat down with The Hard Times to explain why he can’t wait to choke you the fuck out tonight.

HARD STYLE: Do you have an ideal choking victim?
Hoff: Oh, dude, excellent question. I’m an equal opportunity choker. Black, brown, white, purple, whatever, I’ll choke that motherfucker out. The smaller the neck the better though. It’s like magic when I can lace my fingers together around a skinny little neck. I get chills just thinking about it.

HARD STYLE: When did you start wanting to choke people?
Hoff: Ever since I was a baby, bro. My Mom said the first thing I did when she brought me home from the hospital was choke the fuck out of our cat, Pebbles. In high school I was listed in the yearbook as being, “Most likely to choke you the fuck out.”

HARD STYLE: What prompts you to choke people?
Hoff: The usual stuff. Stage diving, moshing too hard, taking your drink onto the dance floor, having a stupid face, being lame or uptight. I mean, even if you just look like you’re the kind of person who’s about to do some weird shit, I’m pretty much going to choke you the fuck out.

HARD STYLE: Ouch, dude, what are you doing?
Hoff: Don’t fight it. Just let go. It hurts more if you struggle.