“Sex and Candy” by Nirvana, and Other Classic Songs I First Discovered on Napster 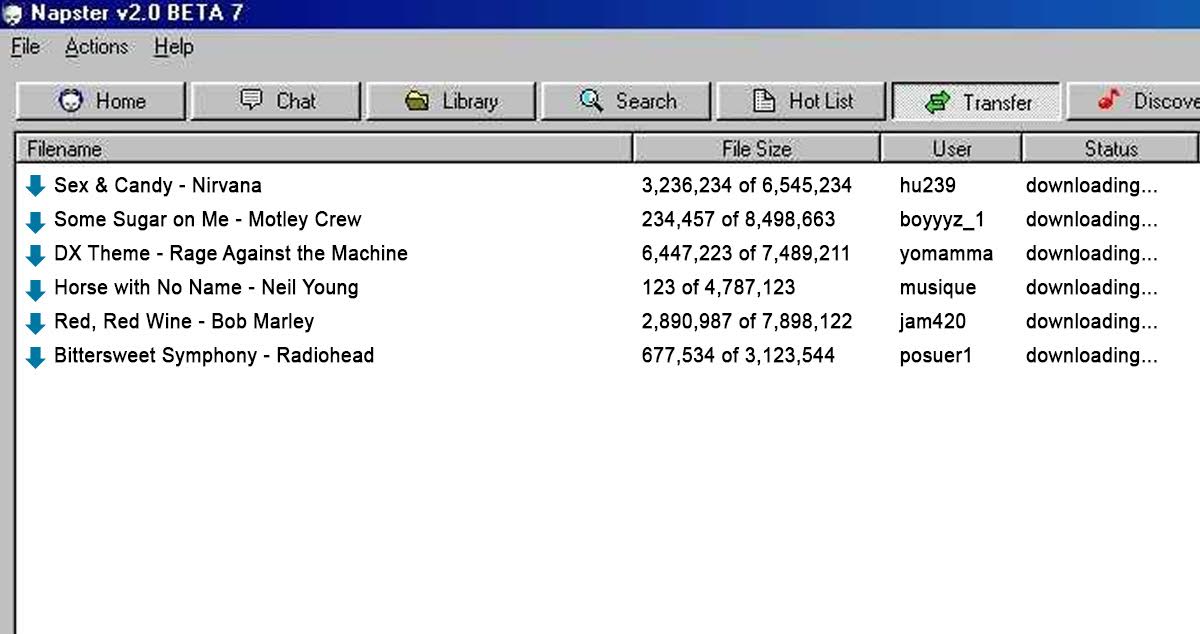 All ’90s kids remember the first time a friend, cousin, or older sibling told them about “Napster.” It seemed too good to be true. And, legally speaking, it was. But we all ran home and downloaded it anyway. Suddenly our music collection wasn’t limited by our allowances and what Tower Records had in stock. We now had everything, from new wave classics like “Boys Don’t Cry” by the Smiths to classic rock radio staples like “Horse with No Name” by Neil Young, just a dial tone away.

The rise of Napster was a glorious, fleeting moment in music history. There was a unique thrill in spending hours downloading something like “Sex and Candy” by Nirvana and having your patience rewarded by hearing Kirk sing those immortal words — “I smell sex…”

Napster was also the first place I heard Rage Against the Machine. I’ll never forget the song “The DX Theme.” It’s odd to think that the anti-corporate Rage would write and record the theme song for a WWF pro wrestling clique. And weirder that the song was unceremoniously excluded from their 2010 box set, I may have never heard that song at all if it wasn’t for Napster.

Of course, there were downsides to Napster. Some days you’d try downloading a reggae jam like Bob Marley’s “Red, Red, Wine” or a hair metal classic like Motley Crew’s “Pour Some Sugar on Me” and just before it’s completed you’d get knocked off the web because your mom needed the phone line. Or you’d download what you thought was “Cats in the Cradle” by Cat Stevens but instead got Bill Clinton advertising IFreeClub.com.

For whatever reason we never questioned why a sitting president would promote IFreeClub.com, or how it didn’t violate the constitution. But it was simpler time, pre-9/11, the world was more innocent.

Unfortunately, those days are long gone. Music just isn’t the same anymore. Still, I do go back on occasion and listen to those old songs, on Spotify (although they’re often mislabeled, crediting the wrong artist). Even now, when I hear those violins from Radiohead’s “Bittersweet Symphony” kick in, it’s like I’m 12 years old all over again.