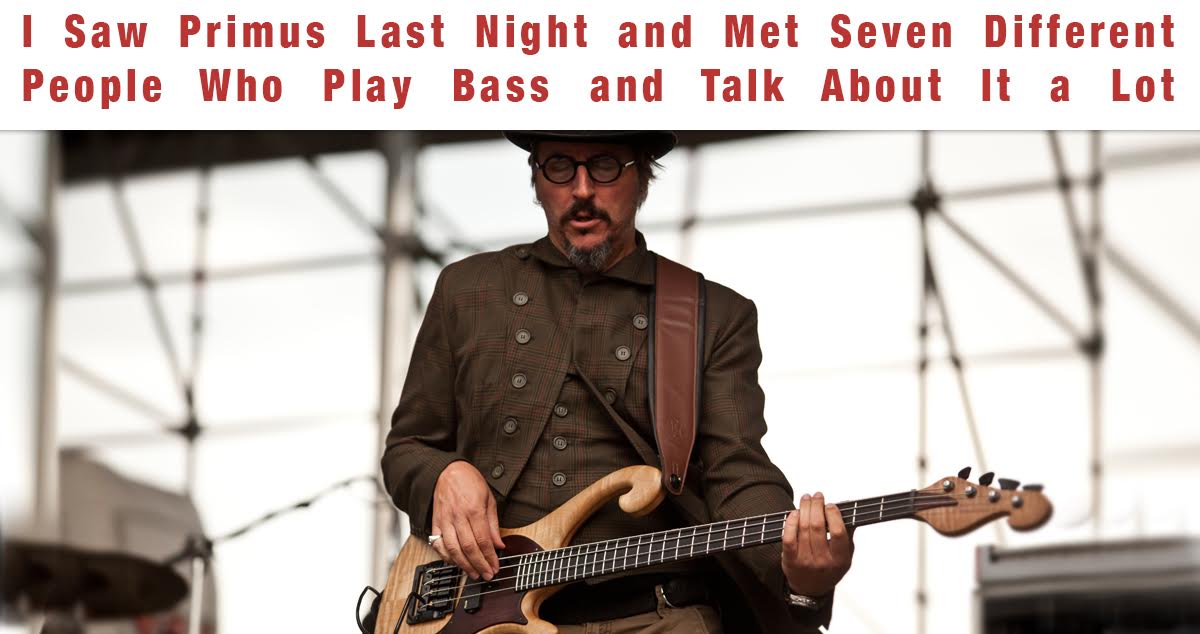 Before seeing Primus for the first time last night, I wasn’t quite sure what to expect. I knew that I would probably get to see some psychedelic visuals, hear some eccentric lyrics, and witness virtuosic performances from Les Claypool and, I guess, some other musicians too.

I got all of this and so much more. And by “so much more” I mean a whole bunch of people telling me about playing bass. From the moment I stepped foot into the venue, I could hear the reverberations of dudes talking about the benefits of playing bass with your fingers over a pick, the intricacies of slap bass, and how many strings were too many strings.

I settled in about 60 feet away from the stage and introduced myself to the seven people surrounding me. All of them played bass, all of them asked if I played as well, and they all seemed equally disappointed and confused when I said no.

Shortly after these introductions, the lights went off and the crowd started cheering. The stage lights kicked on as the opening riff for “My Name is Mud” blared from the PA. The crowd exploded in applause as someone near me described the warm tone Claypool was getting from the active humbucking jazz pickups.

When the band started playing a new one I had not heard before, I leaned over and asked someone next to me what they were playing. I received a detailed explanation of the instrument being played by Claypool that lasted for two and a half songs.

I’m still not sure what that song was but that bass is pretty cool… I guess.

I gotta say it was a pretty incredible show. Claypool was flawless and the two roadies or confused bartenders that also ended up on stage seemed to be having a good time. I just wish everyone had put their cell phones away so I could focus on the band and not look at hundreds of pictures of bass guitars people wanted to buy.

After the final encore the crowd was bubbling over with energy as they made their way out the door. I overheard multiple people discussing plans to start a Primus cover band. Unfortunately, no one there knew how to play drums or guitar.