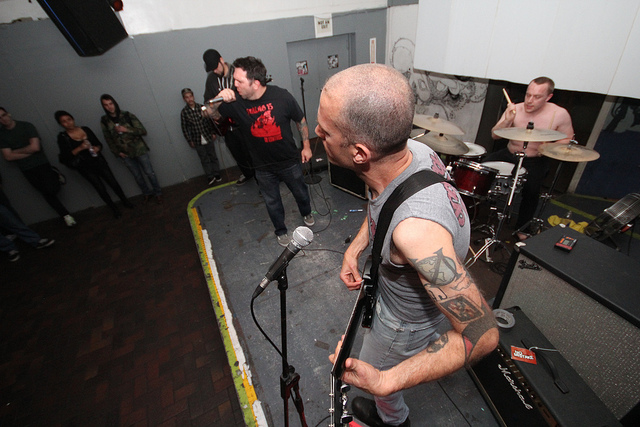 All too often these days I see bands who only go their hardest on stage when there’s a huge crowd. This is exactly what the scene DOESN’T need. If our scene or YOUR band are going to grow at all, more musicians need to give it their all EVERY NIGHT. That’s why when I hit the stage, I rock out my hardest whether I’m playing in front of five people or six.

If you play in a band I have some advice for you: PLAY EVERY SHOW LIKE IT’S YOUR LAST! The people who came out to see you deserve your BEST. If you rock out your hardest, you can make those five people feel like there’s a sixth person there. And if you put everything you’ve got into your performances, someday there will be.

These shows with crappy crowds of five people or fewer prepare your band for huge shows in the future with six or even seven people in attendance. You’ll never get there if you phone it in now. Plus, don’t you realize there could be a big-time manager or label exec in the crowd of that dive bar in Nebraska on a Tuesday night? If you aren’t swinging for the fences every time you come to the plate, you might as well stay home.

Heed my advice, I’ve been there. I used to take it easy on stage if the crowd was a little light, but that all changed one night when I was playing a small show for three people. I stood there on stage like a statue for the first first two songs without so much as acknowledging the crowd. When I looked up NINE people had walked in. The show of my life and I BLEW IT.

I will never live that shame down and The Butt Nuggs may never ascend to those heights of popularity again, but if we don’t it won’t be for a lack of effort. Now, even if there’s only two people in the crowd, I will stage dive with my guitar, I will punch holes in the venue walls, and I will smash my guitar EVERY TIME WE PLAY.

Why? Because I won’t make the same mistake twice. Will you?

You work so hard to make your songs memorable. Now it’s time to make your shows just as memorable too. You owe it to Dan, Bill, Ed, Kyle, Matt, and hopefully, someday, Mark too.

Rock your hardest in your new Hard Times shirt!