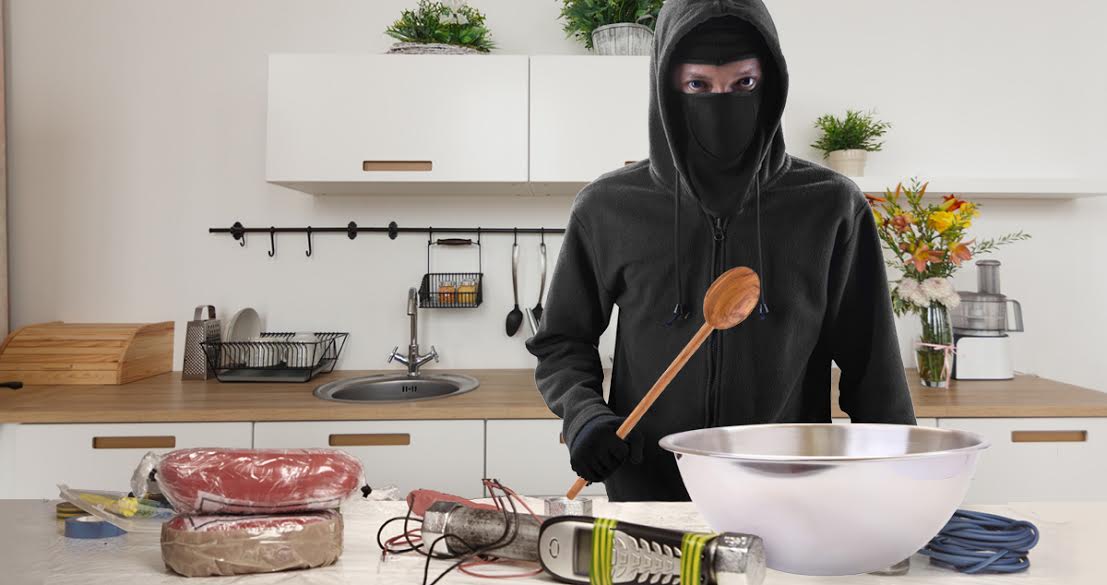 I first saw the Black Bloc on TV during Trump’s inauguration. They were wearing all black and smashing windows and I thought to myself … HELL YEAH! That’s the kind of shit I wanna be doing!

So I joined a local anarcho meetup group and attended my first meeting down by the docks at midnight. Everyone wore black ski masks just like on TV. It RULED. Anyway, I signed up to make food for the next meeting/riot planning. Unfortunately, I forgot to ask what anyone in the Black Bloc liked to eat!

Thankfully, my Amazon Prime account gets me free shipping and I quickly received The Anarchist Cookbook at my door. I hoped this would be full of tasty recipes for anarchists like myself to enjoy, but I was VERY disappointed. Straight up, these recipes taste like SHIT. I only made a few before things went south in my kitchen (more on that later).

Here are my reviews:

There’s always room for Jell-O! HAHA. Just kidding, because this dish tasted horrible! I thought it would be like the chocolate volcano at The Cheesecake Factory or something, but as soon as I put the nitroglycerine, ammonium nitrate, and sodium chloride into my mixing bowl I knew it was going to be a VERY STINKY dish. I mixed them with a wooden spoon and tried a little taste of it. The best way I can describe this dish is toxic plastic with a skin removing finish.

I swore I’d had this dish at a tapas place one time, but after making it I realized I was mistaken. The recipe calls for collecting chlorine gas into a small beaker and then stacking it on top of another beaker full of ammonium nitrate. I put it on and took it off heat a few times to make a reduction and ended up with some sort of goopy blue substance. It looked sort of like a soft cheese so I spread it onto a rye cracker, I took one bite and vomit immediately shot out of my nose! NOT what I was hoping for!

Cocktails for anarchists! Something soothing to sip on after a long day of punching fascists in the face! Or so I thought. The recipe calls for an empty bottle filled with two parts gasoline and one part motor oil. I shook them up a little bit and took a sip. I’ll be damned if I didn’t spit it right back out! Really bitter flavor. I figured that maybe I was missing out on the full package because I hadn’t lit it on fire yet. The molotov cocktail calls for a little fire, like a flaming Dr. Pepper or something? So, before I bailed on the whole drink, I put a gas soaked rag into the bottle and lit it. It literally blew up my entire kitchen! I made it out OK, but I am SERIOUSLY worried about other anarchists serving this beverage at their cocktail parties!

In the end I was HIGHLY disappointed with the quality of these recipes. I left the book a 1-star review on Amazon, but honestly I wish there was an option to leave a ZERO-star review! It looks like there are going to be some hungry anarchists at our next meeting. Maybe I’ll just pick up some hummus at Whole Foods on the way down to the docks.