Opinion: As an Optimist I Choose to See the Koch Brothers as Half Dead 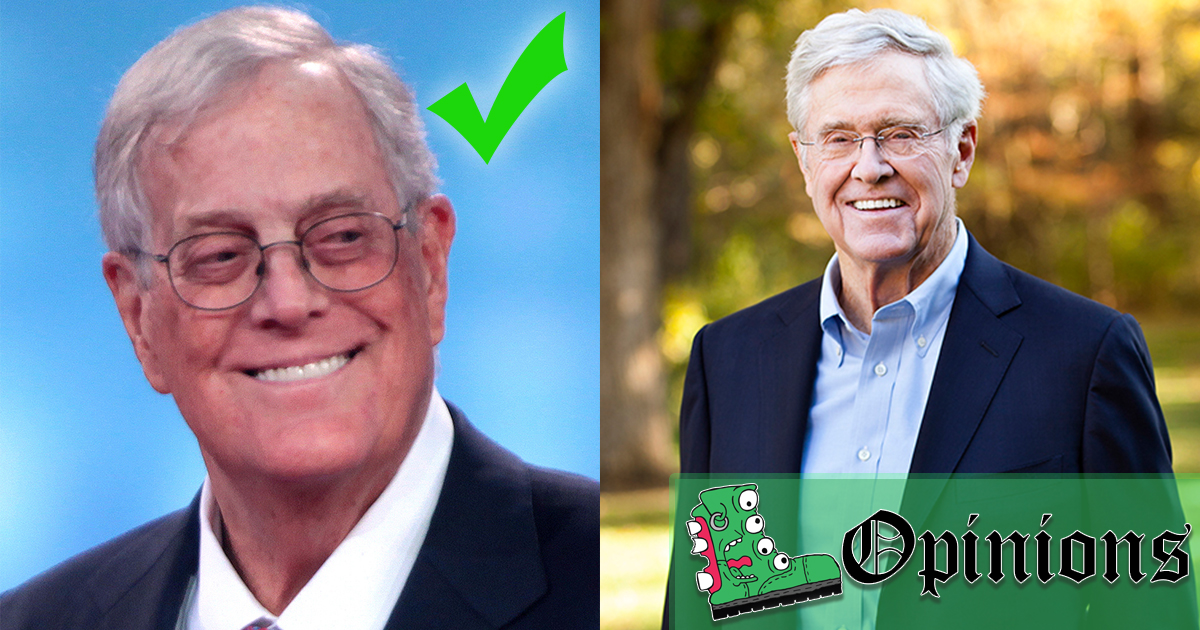 I’ve always thought of myself as a pretty positive guy. A bird craps in my eyes, I’m like, “At least I have another eye.” When Trump won the election, I was like, “Hey, at least I’m white.” Stuff like that. I’m an optimist. So while some may view the Koch brothers as half alive, I’m choosing to see them as half dead.

Sure, only David Koch is dead so far, but look on the bright side – half of the Koch brothers can no longer spend millions of dollars to slowly murder the planet and all of its inhabitants. From here on out, Charles (and only Charles) will have to decide whether nuking Washington, D.C. counts as “protecting economic freedom.” Two sickeningly rich libertarian heads are better than one, you know.

And, yeah, a Debby Downer might point out that technically there are two other Koch brothers out there probably tag-team skinning a cat at this exact moment, but remember, those dweebs also tried suing the headliner Kochs in the late ‘90s. I count those guys as just kind of chaotic-neutral nobodies at best. Besides, who’s going to take borderline illegal Super PAC money from a guy named Frederick?

But I’m an optimist. This is why I’m pointing out that, while the Koch brothers may have mobilized conservatives against Obama, gave rise to the tea party, and paved the way for Donald Trump’s presidency and the deep, unsealable divide we’re experiencing in American politics today, at least their millions in self-serving medical research didn’t give them immortality! That’s a win… I guess?

At least I’m pretty sure I’ll die someday which might be nice. Again, I look for the silver lining in all clouds. Especially in the cloud of acid rain formed as a direct result of lowered emissions regulations thanks to the lobbying efforts of the Koch brother’s Super PAC that is currently showering me in life-threatening chemicals.