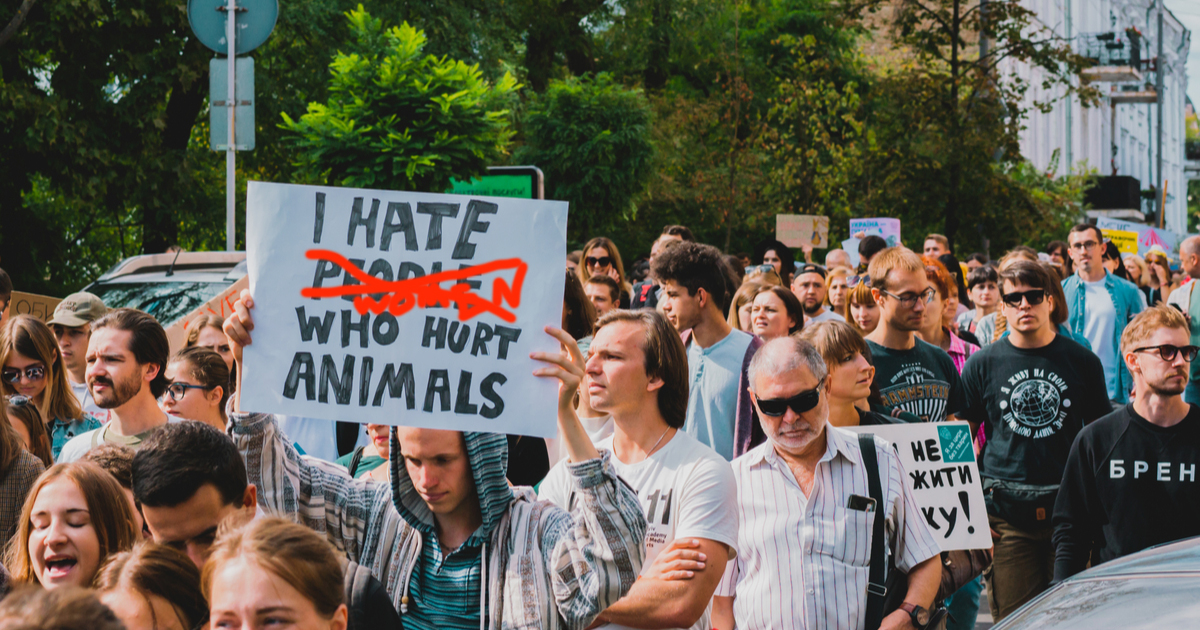 Punk lifestyles and animal rights activism have gone hand-in-hand for decades. When The Hard Times heard about a guy called Brent Crenge making “big waves” in the fight for the ethical treatment of animals we went out to meet him the first chance we got. Turns out we should have done a little more research!

It turns out Crenge’s way of shaking things up in the animal rights world was by incorporating a bunch of insecurity based misogyny into his activism. He’s not the sort of man who’ll let good people gatekeep a good cause. His determination to bend the issues into a vehicle for his own misplaced anger would be an inspiration if it was aimed towards, like, literally anything else.

Evidently despised by the rest of the collective, we found him in a side-room addressing half a dozen intense young men. And for a few minutes he did almost seem like the real deal — talking about male calves in the dairy industry, and male baby chicks in the egg industry, both of which get killed by the thousands soon after birth. But it didn’t take long for him to make it super weird!

“Young male animal lives are deemed worthless because of institutional gynarchy. What are the feminazis afraid of? A whole generation of powerful young male animals growing up to fulfill their destiny as studs?”

We assumed an animal rights awareness meet run by a local anarcho-punk collective would be full of selfless angels fighting the good fight. Turned out to be more or less a 4-chan message board irl.

The creepy weirdos lapped this wet catshit right up. After the talk they were keen to tell us all about Crenge’s concerns about under-supported pregnant male seahorses, which “actually made a lot of sense”. And there were his views on hermaphrodite animals, which “needed to be aired”, and the “deliberately overlooked” issue of female octopuses strangling their mates after sex.

Admittedly we did almost buy one of his t-shirts, a praying mantis with the word “Murderess” stamped across its face. It looked cool! But knowing the context kind of ruined it for us.

He requested, well demanded, that we reprint his 20 page manifesto about how male penguins are being cucked by their lovers, but we decided to decline. I mean, it sounds funny, but then it’s 20 pages about cuck penguins. Pages we can’t unread.