No One Remembers I Used to Be in From First to Last, Right? 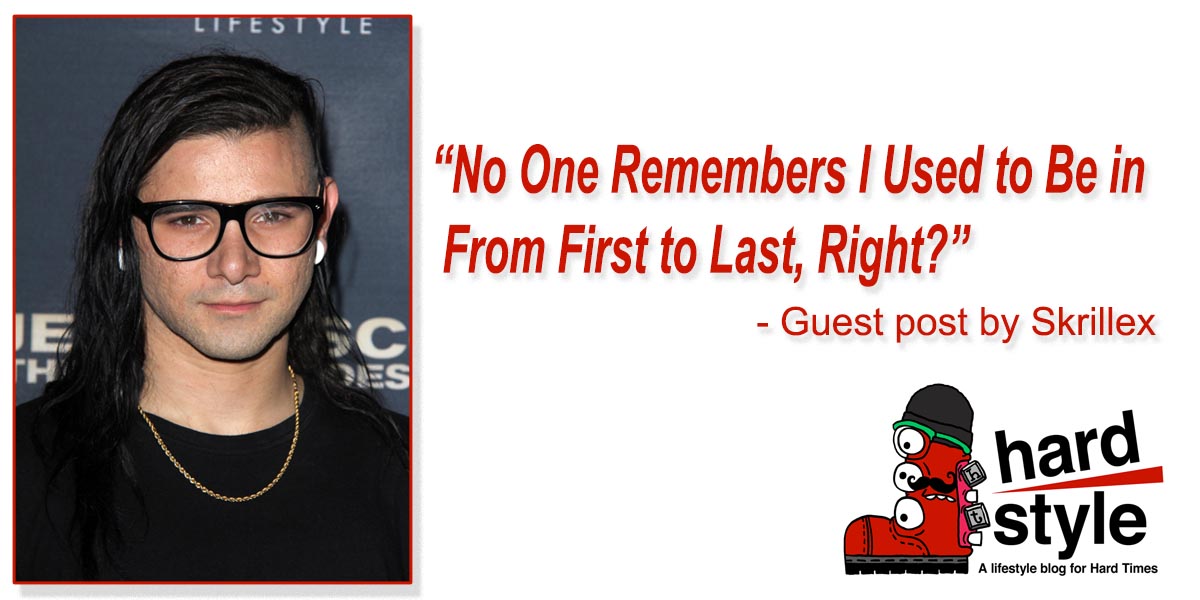 What’s up everybody? Skrillex here to write a LiveJournal entry, I mean cool blog post, about all the sick stuff I’ve got coming out soon to further distance myself from my embarrassing past as the singer of pop-screamo-boy-band From First to Last.

Wait? Did someone say From First to Last? No, right? That’s not relevant anymore. No one remembers that about me, right?

For real though, all sorts of dope shit in the pipeline right now. Remember my collaboration with Justin Bieber last year? I’ve got something even better dropping soon. Get ready to be surprised. Almost as surprised as when you came across your CDs from middle school and realized I was on the back of some of the worst ones. I mean, what could be crazier than a Bieber collab!?

As an artist it’s important to evolve and influence others. I remember when I shaved the side of my head. Fuck, everyone in 2011 was getting the Skrillex look. It was more of a craze than “guyliner” was in 2005. Not that I ever wore guyliner or anything as the vocalist of From First to Last. Besides, if I did I was only like 15 years old. I hang out with Deadmau5 and Katy Perry now.

Fans of my early work are going to love my next album. Remember when I dropped my first album? No, not the one that you wrote the lyrics to on your middle school binders with fingerless gloves, my dubstep stuff! I didn’t write lyrics on this one, the new album will sound like a vacuum cleaner fucking the maid from The Jetsons don’t you worry!

I also have a tour in the works that I can’t tell you about just yet but I promise you’ll love it! I guarantee it won’t remind you of your teenage years posting embarrassing Myspace bulletins and struggling to squeeze into skin-tight jeans. We’re gonna get drunk and party because I’m an EDM dude and that’s what we do, homie!

Anyway, the future’s looking bright. Always moving forward and definitely not running from my past as a mall-goth scene icon. What? Who said that? Not me.

Keep checking back and follow me on social media to keep up! Just don’t go to my Wikipedia page, not that I have anything to hide about writing overtly cliche albums called Dear Diary, My Teenage Angst has a Body Count and stuff. That’s emo and stupid, who would be into that kind of stuff? How sick is dubstep?