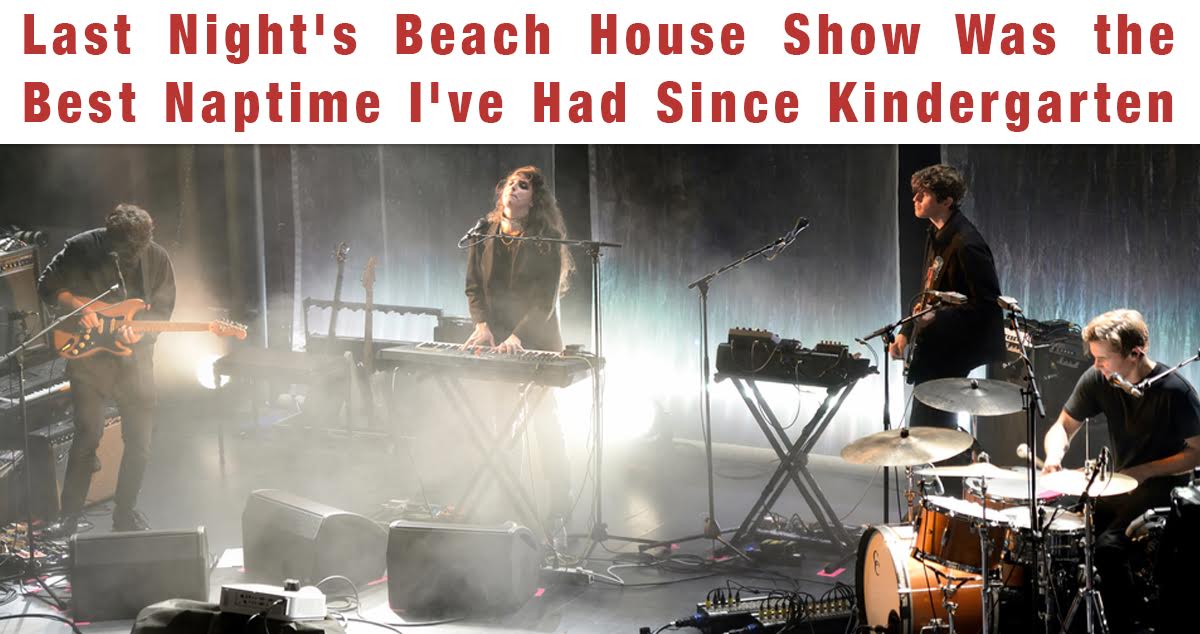 I saw Beach House play an intimate set at Starry Night yesterday and it was just what I needed. It was, hands-down, the best naptime I’ve had since kindergarten.

I’ve never seen them live before so I wasn’t sure what to expect. My date hooked me up with the tickets, she had seen them a bunch of times. When I met her outside the club she was already wearing jammies and carrying a fuzzy monkey-shaped pillow. Inside Starry Night was over 300 Beach House fans, all decked out in their coziest jam-jams. And here I was, in a band T and jeans, looking like a tool.

Victoria Legrand and Alex Scally stepped onstage with steaming hot mugs of coffee. My date explained they always drink coffee during their sets, ever since an embarrassing show in 2009 when Scally passed out on top of Legrand’s keyboard.

The stage was illuminated with soft lights, the shadow of a spinning mobile cast on top of the band. I could make out sheeps, rockets, and smiley faces twirling in the light. They opened with “Elegy To The Void” and I was out cold before they hit the chorus.

No hyperbole: that concert was the best nap of my life.

The last time I slept that well was in Missus Carlyle’s kindergarten room after eating a whole bottle of paste. I woke up as the band finished their encore with a thick line of drool crystallized on the left side of my face. My date was face-down on her monkey pillow, snoring so loud I couldn’t hear Legrand sing. The entire floor of the venue was lined with napping bodies cocooned in pillow forts, blankets, and Beach House-branded Snuggies.

Playing the final notes of “Sparks”, Legrand and Scally bowed and quietly tippy-toed offstage. A stagehand stepped out to grab Legrand’s keyboard and accidentally kicked a bass pedal across the floor, waking up the front row, who started sobbing angrily. Beach House’s tour manager came out and gently shushed them back to sleep. I saw him pick up a critic from The Valley Voice and gently rock him back to sleep.

I tell ya, the only way this show could have been better is if I had a stomach full of Elmer’s glue.