Jeff Rosenstock Gives Us the Full Tour of His Bike 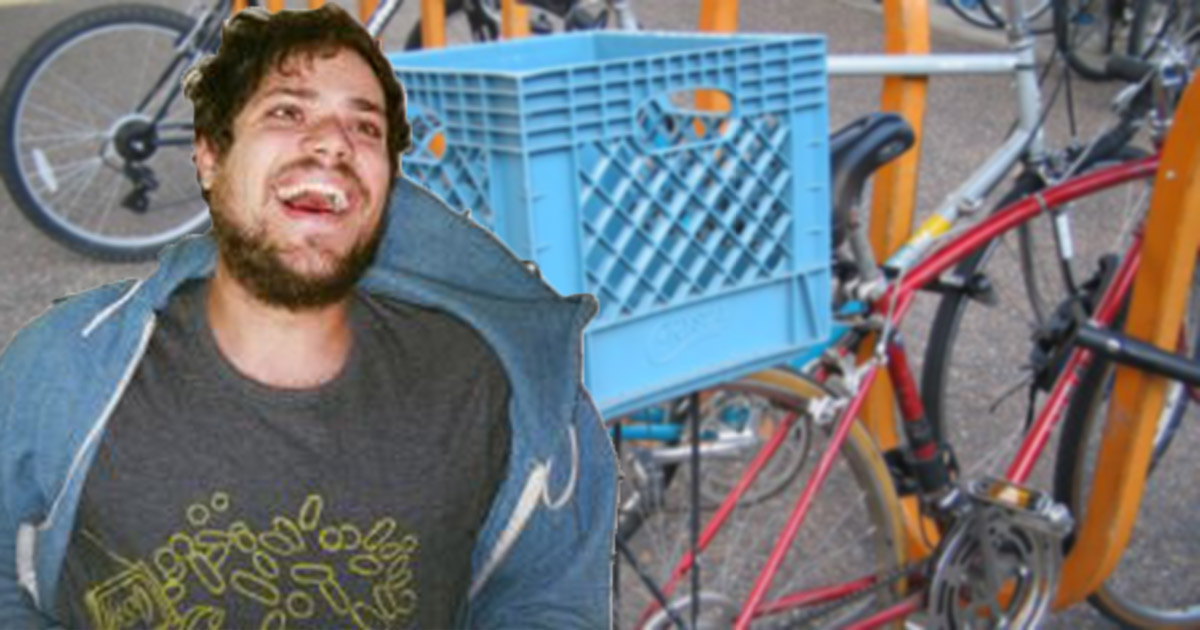 Jeff Rosenstock has been an icon of DIY performance for almost 25 years. With his hands in projects from every genre, Rosenstock has dedicated his entire adult life to music. So when The Hard Times got an opportunity to take an exclusive tour of his custom built ten speed deluxe tour bicycle, we jumped at the chance.

“Well, for one, it’s not custom built,” Rosenstock, cult hero, started, “Also, it’s actually a fixed gear. It was given to me as a gift while I was writing WORRY. But I do use it to tour.” He motioned to the guitar case hanging from the handlebars, explaining that he found it on the lawn in front of his apartment complex. “I asked everyone in the building if it belonged to them. Then I put up some flyers and kept it out of the rain. After two weeks, I decided to keep it. I still put an ad on Craigslist every once in a while just in case.”

The lifelong musician pointed to a milk crate held to the back of the bicycle by a bungee cord and plucked on the taut wire. Hastily duct taped to the crate was an old boombox. He popped it open and pulled out Squeeze’s Cool for Cats on cassette. “Check this out,” he said, handing us the tape. “Be careful, it’s my only copy.” He kept his anxious eyes on the cassette and explained, “Chris Farren gave me this radio when he saw me trying to whistle and go uphill at the same time. I was very out of breath. Can I have my tape back now?”

The dedicated do-it-yourselfer brought us down to the pedals of his bicycle, one of which was missing. “I have been meaning to get these fixed, but between touring and and writing and scoring Craig of the Creek,” he shrugged, “I can get by like this.” He sat on the bicycle and put both of his feet onto the pedal. “There are some people who don’t have any pedals. I could have it worse,” he said, making a large circle in the Burger King parking lot. The beloved and talented performer came to a stop and dismounted. He reached with his foot for the dented aluminum kickstand,which crumpled beneath the weight of the bike, sending everything crashing to the pavement. The wheel spokes busted open.

“Oh,” the hero of upbeat independent punk rock deflated, “That’s okay. I can tour Europe on my scooter,” he motioned to a Razor Scooter with a Fender amplifier tied to the front and thanked us for coming out to meet him at work.