Investigation: Does This Photo Prove Donald Trump Was the Drummer of Youth Defense League? 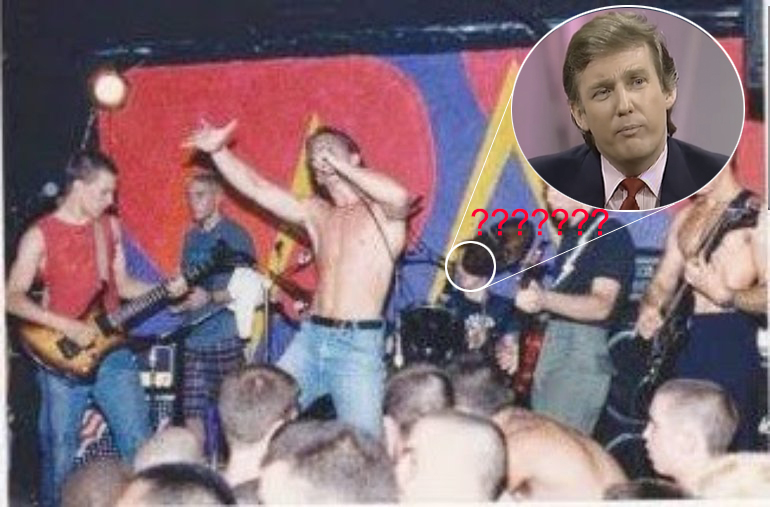 Trump has been criticized by many along the campaign trail for harboring fascist beliefs and even white power sympathies. Sound familiar? The EXACT SAME accusations were brought against YDL in the ’80s.

Hell, we’ve even seen memes of Trump listening to Skrewdriver (and trust us, it wasn’t the first album). You know who else listened to Skrewdriver? That’s right, YDL. They even went so far as to thank Skrewdriver on Revelation Records’ New York City Hardcore – The Way it Is compilation. Would you be shocked to learn they both had Ian Stuart’s phone number? Because we sure wouldn’t.

All those similarities are hard to ignore and after we saw this picture, where in all honesty the drummer’s face isn’t really visible, we had to investigate.

The first thing we need to consider is location. YDL was formed in New York City in 1986. And where is Donald Trump famously from? New York City, OF COURSE. Put two and two together people!

Unfortunately, for this investigation that seemed rock solid only a few moments ago, this is where our theory starts to fall apart. Even though Trump was in New York at the time this photo was taken, he was also a multimillionaire real estate developer. And despite some hard meme evidence, there doesn’t seem to be any substantial ties between him and the NYHC skinhead scene at all. Also, earlier this year the former YDL singer was fired from his job as food critic after his past was dug up. During that internet controversy it probably would have come out if he played in a band with Trump. Yikes.

In retrospect, it was pretty reckless for us to publish this article without checking our facts first, and just ending the headline in a question mark. For that, we apologize. It just really seemed like there was more to this. Although we would still bet that the guys from YDL are voting for Trump today.

Do you have any more photos that connect Donald Trump for the late ‘80s RAC scene? Let us know in the comments below.