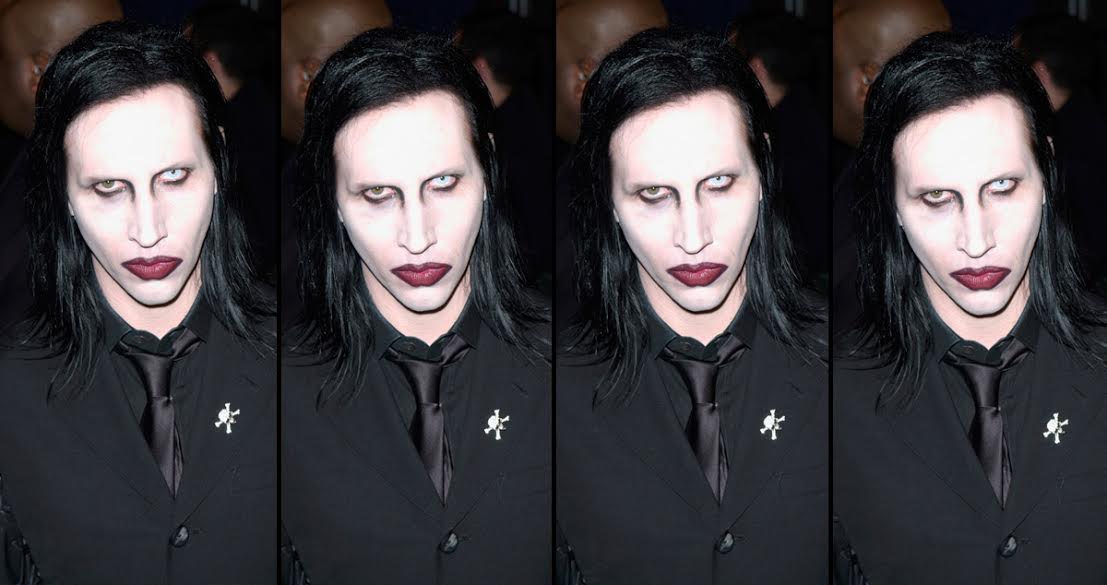 I am a very real and very important journalist who reports on all sorts of trendy fascinating subcultures. That’s why when someone sent me an anonymous tip with the idea to do an article interviewing men who had a rib surgically removed in order to suck their own penises, I didn’t think much of it other than that it was a good idea.

What I did not know at the time was that every single subject I interviewed would end up being Marilyn Manson.

My first interview subject was Marilyn Manson himself.  We sat down and had a fascinating discussion about the benefits of removing a rib in order to suck your own dick. It’s a beautiful artist process, truly. According to Manson, all of his talent is locked away in his DNA just waiting to come out as art. So what’s the best way to get at the fresh ideas flowing through his body? You guessed it: sucking down his own sperm. Naturally, jerking off into a bottle and drinking the semen that way allows for the ideas to die and Manson ensured me that his best songs were written when he got his DNA right from the source: his urethra. Marilyn Manson is a true artist and I was honored to learn about his process. On to my next subject.

When Peter contacted me via email, I was excited to meet a second person in what I imagined was a diverse community of men who had removed a rib in order to suck their own penises. To my surprise, when Peter and I met, Peter was very obviously just Marilyn Manson in a Groucho Marx mask desperate to talk more about blowing himself. At first I was angry, but I quickly became fascinated by the stories he told. Apparently, Hombre — er, Manson — sucks his dick three to four times every single day so that he has no need for love and therefore has more time to work on art. He claims that, “The Beautiful People” was written during a time in which he was sucking his own cum down every fifteen minutes or so. Art is great. I was looking forward to talk to more people in this world.

John spoke to me on the phone last month and we agreed to meet at a coffee place nearby. I could tell on the phone that the voice was nothing like Marilyn Manson’s so I was excited. When I got to the coffee place, though, I noticed something was amiss when I saw that John was a 9-foot tall man wearing an enormous trenchcoat over his strangely lumpy body. I didn’t want to judge. Maybe this strange body was the reason he needed to resort to his own mouth to find pleasure? It wasn’t until we began talking that it was clear John was actually sitting on the shoulders of another man whispering what to say inside that trenchcoat. When that man started whispering about Marilyn Manson’s new album,  I became suspicious that the man was Manson himself. I left angrily but was optimistic about my next subject.

Because, you see, my next subject was me.

When I was 19 years old I removed one of my own ribs so that I could suck my own penis. It was a wild and exhilarating experience that I will never regret. Being able to suck my own dick gives me a freedom that allows me to get all my ideas in order without relying on external romance. As I was preparing to jot down some self reflective notes about the self-sucking community, I ran my fingers through my long jet black hair. I glanced in the mirror at my face. As usual, it was a white sea, accented by my bright eyes and my dark red lips. But — wait a minute.

I am Marilyn Manson.

How the fuck did that happen?! Let me check … holy shit. That email about the article idea … it was sent from me.

This has been an eye opening and insane experience. Please, please buy my new album Say10 that comes out next month.

In the meantime, I gotta go suck my own dick.

Are you shocked to hear that Marilyn Manson had a rib removed so he could suck his own dick? Let us know in the comments below!