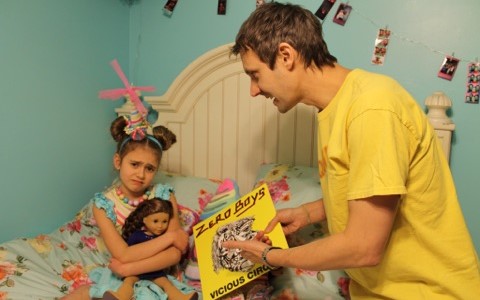 I need some parenting advice. I’ve tried everything to get my 8-year-old daughter to be punk but she just won’t listen to anything I have to say.

How do I stop her from being rebellious and listen to me so I can show her how to be punk?

I buy her obscure 7-inch hardcore records and Misfits tees but all she cares about are dresses and dolls. How is she ever going to become a punk if she won’t listen to her parents?

Forget the Ramones or Rancid, all she wants to listen to are “Ana and Elsa.” Are they like indie singers or something? Like a Tegan and Sara thing? To be fair, there is a pretty sick ska song in her favorite episode of Sofia the First, but it was mostly a Save Ferris rip off anyway.

I try to be a supportive father, but it’s honestly embarrassing. You don’t know pain until you’ve been forced to drop your child off across the street from daycare because they insist on dressing like some fucking normie cheerleader. Watching her dart across two lanes of traffic was probably the most difficult thing I’ve ever had to do in my life.

There was one time I got hopeful when my daughter found a pair of scissors and was cutting off her hair — clearly in an attempt to give herself her first mohawk. We were such proud parents that day. My wife even shrieked out of pure joy when she found me watching our daughter in approval as she wildly wielded those scissors around her head.

There was also the time she said her favorite color was “punk.” I was so proud until I realized she probably meant pink so I had to throw away everything pink in the house.

Early on when she was learning to walk, she would just kind of stomp around in a circle. Like any good father, I proudly pictured her just wrecking mother fuckers in the pit. I think that was just a phase though, because she always gets so shy when I bring her into actual mosh pits.

By the way, nobody tag my wife in this. Or child protective services.