If I Don’t Wear My “Fuck Joe Biden” Shirt to This Child’s Birthday Party, How Will All the Other Parents Know I’m an Alpha? 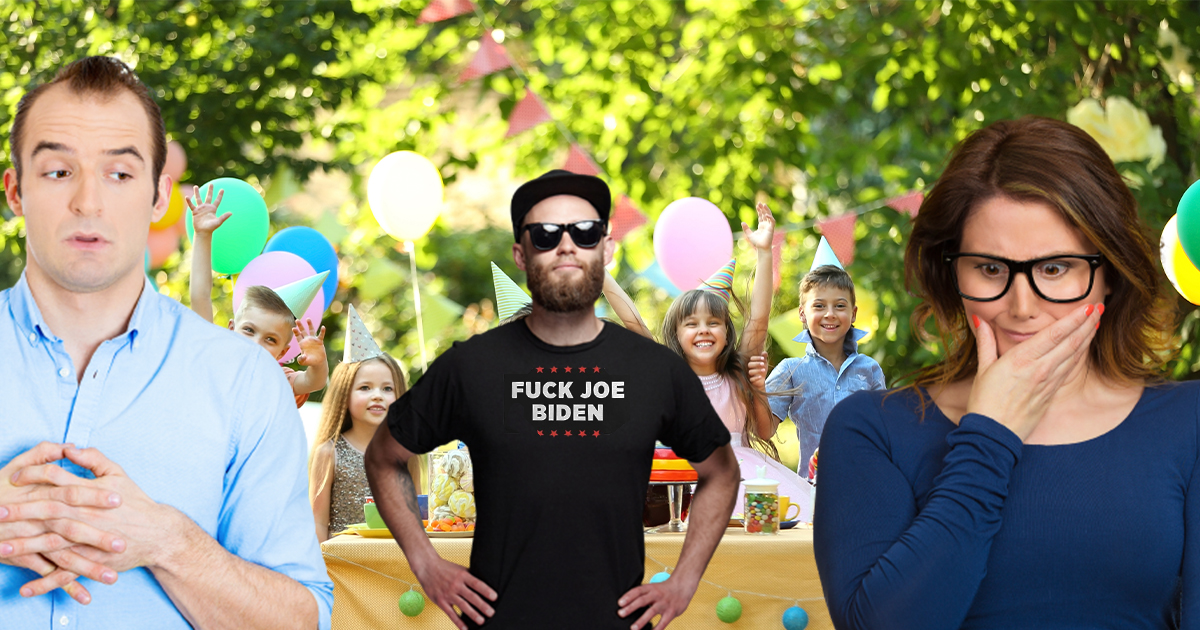 It’s hard work being one of the only true Alpha Males left in this world. A major part of being an Alpha is constantly letting everyone know that you’re an Alpha. The last thing an Alpha like me has time for is explaining my superiority to a bunch of strangers one by one. That’s why, as an Alpha Male, I have to wear my “FUCK JOE BIDEN” shirt to my niece’s 4th birthday party today, as an alpha.

Some of you may think that because it’s a party full of children I should wear my censored, secret-code “Let’s Go Brandon” shirt. Well isn’t that some soy-boy, mocha chocolate bullshit? Someone has to teach these kids that life doesn’t care about your fragile little feelings. You’re going to run into people in this world who don’t sugar-coat anything.

If one person leaves that party without knowing I’m an alpha lone wolf who doesn’t give a fuck about their feelings I will cry myself to sleep tonight, so “Fuck Joe Biden” shirt it is!

Don’t like it? TOO BAD PUSSY! The “Let’s Go Brandon” shirt is reserved for weddings, funerals, and job interviews if my Beta, bitch-boy recruiter ever sets any up for me.

And I am just HOPING that one of the parents attempting to raise obedient little worker bees says something to me about it. Nothing would give me greater pleasure than teaching some cuck a lesson in front of his son, to show him what a REAL man looks like. I bet he even teaches his kid not to hit, so he probably won’t even attempt a swing at the pinata. Which should be Joe Biden, by the way.

By the end of this party, if I can convert even one of these kids from a cute, innocent, naive little sheep into a blood-hungry, take-no-prisoners lion, isn’t that worth it? I even brought a printout of Dr. Fauci for the kids to play pin the tail on the JACKASS with. Knowing my bleeding heart liberal sister, she probably won’t even let me put it up.

Save the liberal, crocodile tears for someone who gives a shit. My right to wear what I want does not end where your kids’ feelings begin. And if anyone has a problem with it, I will just sic my son Donald on them.