I Just Met the Ghost of Tom Waits, Which Is Weird Because He’s Still Alive 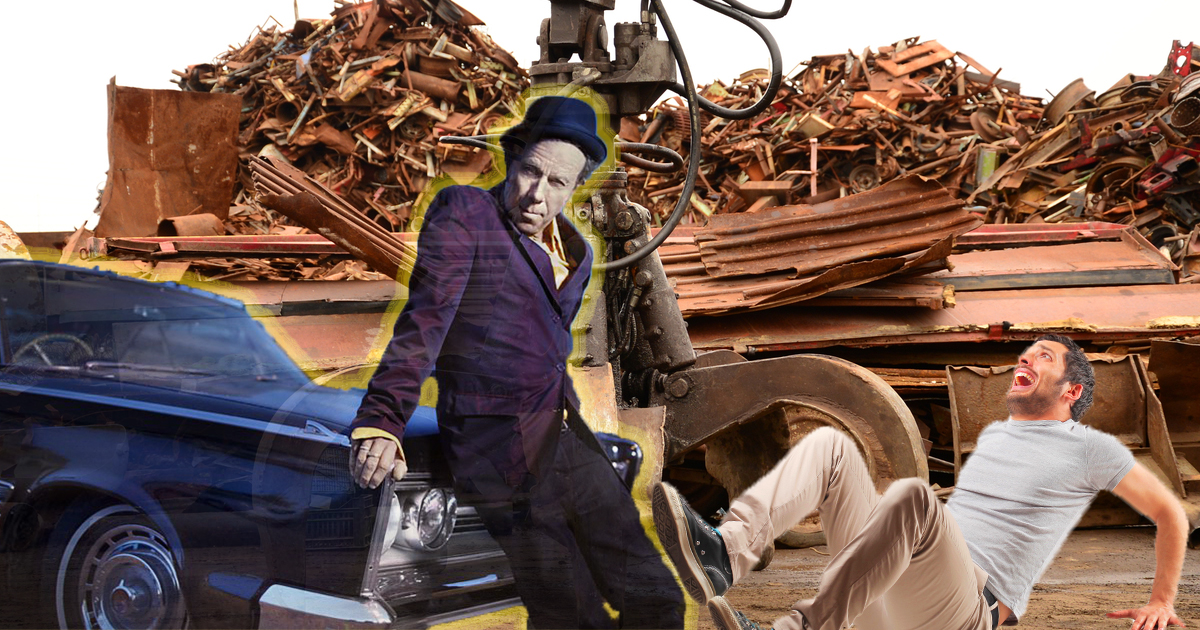 So there I was, taking the shortcut home from work. Normally I take the long way home, but tonight I was working late and feeling adventurous, so I decided to cut through the old junk yard. I was walking past the frame of rusted-out Cadillac when I heard something that sounded like rattling chains–or maybe rocks rattling in a glass of a double bourbon as the clock slowly ticks towards closing time.

Suddenly, junkyard dog leapt out at me growling and baring his teeth. Just as I thought he was about to sink his teeth into me, an raspy voice called out. “Easy, there pooch,” it said. It sounded like his vocal cords were stretched out by race horses goaded on by a desperate loner down on his luck. The dog instantly calmed down, as if he understood the man’s pain because he too, howls at the moon.

There, standing, almost floating before me was the ghost of legendary American singer-songwriter, Tom Waits. An eerie feeling crept over me as my cold sweat dried on my trembling brow, as I thought, “Wait, what the fuck? How old is Tom Waits?”

I quickly dove behind an old abandoned engine block as I did some research.

“It’s so strange,” I thought, fingers shaking as I Googled his name, “According to wikipedia, he lives in Somona County, California with his wife, Kathleen Brennan and their three children. He’s only sixty-eight for Christ’s sake, my dad is older than that!

My mind began racing as I tried to figure out how this could be possible. “DId he die off like every other celebrity back in 2016? No, I’d totally have noticed that. I’d have seen countless shitty covers of ‘Martha’ if he died.”

While deep in thought, I didn’t notice the ghost of the Very Much Alive Tom Waits as he drifted over to me. “Hey, pal,” he said ominously. “Want I should deal you in?”

I sat there terrified, but was quickly comforted by the ethereal appearance of a poker table and chairs filled with other lonely ghosts. I hesitated at first, but I came over at Tom’s insistence. We spent all night gambling, drinking, and telling dirty jokes. The off key carnival music that filled the air was creepy but in a fun way. Then, at around 3:00 am Tom just looked at his old timey pocket watch and said “Sorry boys, gotta pack it in, I’m filming a new Jim Jarmusch movie and I need to be on set in 4 hours!” and everyone and everything just vanished.